The art of creating hype by releasing free music is nothing new in the world of hip-hop, where bootlegged mixtapes have kick-started the careers of everyone from Grandmaster Flash to Lil Wayne. The difference today is the sheer quantity of free releases, and the luxury of being able to make a free digital download available to anyone in the world. There's no shame or stigma attached to such a practice, as evidenced by the fact that two of Lawrence's most promising up-and-comers Skik Figa and Spence are giving away their latest releases.

As Literary As He Wanna Be

Prison Poster Project showcases art from the inside

In the summer of 2004, the We Are Resisting conference was coming to Lawrence and it was expected to draw hundreds of anarchists from across the country. Chantel Guidry, who ran the local chapter of the Anarchist Black Cross, a prison abolition network, was helping organize a prisoner art show to coincide with the conference.

New Kid on the Voting Bloc

John Wilson is literally a fresh face on the Kansas political scene. This 24-year-old KU alum looks more like a clean-shaven grad student than the usual stuffed suits and liver spots you'd find moldering in the halls of Topeka. Given his youth and relative inexperience, few expected Wilson to make much of a dent when he threw his hat in the ring as the Democratic candidate against Tom Sloan, who's represented Lawrence and the 45th district in the state House for 14 years.

Townie guide to... massaging the stars

My 13-month-old daughter has reached that age. The one where she knows what she wants but not how to tell me. So, incidentally, she has discovered anger. 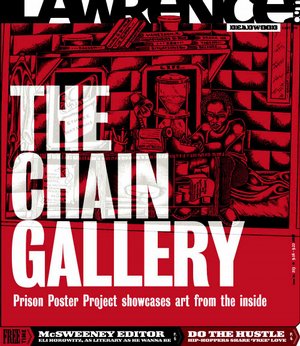