A normal schmuck might see these things and think, "Huh, that's interesting," and move on with the day. The curious-minded packrat might even take 'em to the garage for safekeeping. An artist, on the other hand...

Still Righteous After All These Years

The fierce independence of Ani DiFranco's music and politics

After releasing dozens of albums and touring virtually non-stop for 20+ years, one could be forgiven for slipping it into cruise control for a while. But that's not what won Ani DiFranco an army of devotees and feminist icon status. The outspoken folk-funk-rock pioneer shows no sign of slowing her crusade to achieve independence both artistically and politically. "Red Letter Year," her 18th studio LP-not counting her numerous live albums-is out via her own label, Righteous Babe Records the day after she plays Lawrence.

Allow me (a KU graduate) to introduce myself ... 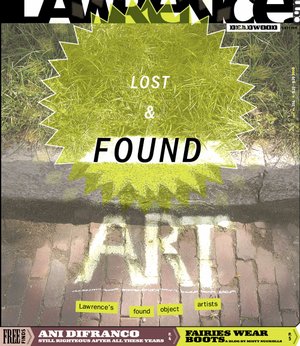