The Reconstruction Will Not Be Televised

Forty years ago this month, a group of Lawrence radicals published the first issue of what has to be Lawrence’s most incendiary newspaper to date.

Aaron Marable returns to Lawrence with “Thick as Thieves”

After some far flung detours to Costa Rica and California, painter Aaron Marable is ready to make another go at the Lawrence art scene.

Wherein we peruse the news that was new last week...and make fun.

New Lawrence Arts Center Director David Leamon is faced with the Obama-like challenge of resurrecting an ailing institution in tough economic times, and of regaining the respect of local artists, many of whom now criticize the LAC's exhibition policies as largely unrepresentative of Lawrence's varied and vibrant arts scene.

Staying drunk for the decade is a great idea.

I drink more than I eat. That saves money on food. 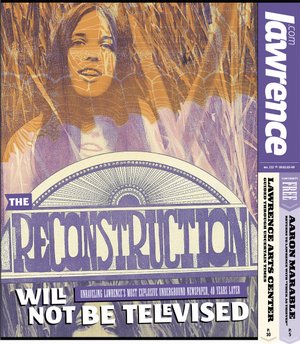