Downtown Lawrence gets a lungful of hookah

The hookah—it’s not just a tentacled water pipe used for smoking exotically flavored tobacco, it’s a cultural bridge. Well, that might be a bit lofty an analogy for what’s essentially an ornate piece of paraphernalia, but at the very least it’s a universal symbol of mellow that knows no boundaries. And Lawrence is just the latest corner of the globe to take a deep hit.

I find me a sugar daddy every now and again if I can, but it's hard to do in a college town, you know?

Lawrence’s reputation as a transient music community overlooks the dedication of dudes like Johnny Quest. The DJ, producer and emcee has been a vital cog in the local hip-hop machine since he was old enough to get X’s on his hand.

I'm not a fan of sweatpants, and I don't like when people throw a bunch of weird stuff together.

I speak to my cats in spanish.

Can you spare some CHANGE?

What some everyday Joe Six-Packs we yanked off the street had to say about the inauguration of Barack Obama... 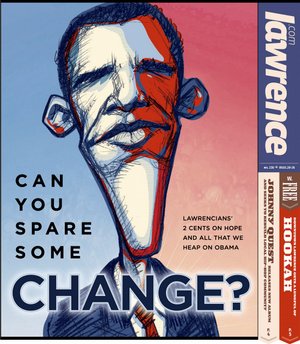