Lawrence filmmakers take “The Only Good Indian” to Sundance

Kevin Willmott is no stranger to Park City. The KU professor and filmmaker has made his second trip up to this mountainous region of Utah, not for the prime snowboarding or polygamy, but for that swirling maelstrom of celebrity and cinema known as Sundance.

Stepping out in our Sunday best with a camera and a roll of Tums, we hit as many Bloody Mary specials around town as we could to find out just what it is about Sunday that makes it the “bloodiest.”

Townie Guide to… getting your bowl on

Iggy Baby fully embraces the nu-club culture, but he’s not blind to the merits of the old school. His DJ sets on Thursdays at NEON and his Get Crunk! sets at the Jackpot are just as likely to feature Aaliyah and New Order as fresh underground cuts, laying down a hip-yet-accessible beat for the (un)cool kids to groove to. 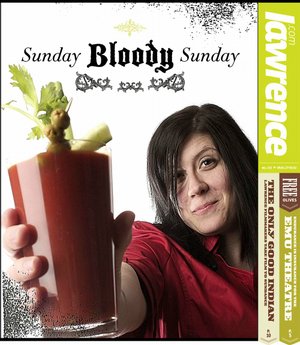