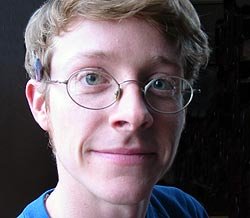 What a huge compliment to <a href="http://www.lawrence.com/bands/ghosty/">Ghosty</a>. And we know exactly how you feel. Except for the killin' part. And the Ghosty part. -homies

I've seen the commercial that you guys run about 30 times and every time I see it I get more and more offended. The 'cause babies ain't free' part is kinda cute, but it's the part before it when the man refers to hip-hop music that disturbs me. Either the man is being blatantly racist since hip-hop is art predominatly represented by blacks or the man is being prejudice against hip-hop music. I don't know, maybe you had to be at the show when it was said. However, using it to promote Lawrence.com is very bad taste because it offends a lot of people and adds to the stereotypes that have already began to slow the progress of race relations in this town.

We regret any misunderstanding. <a href="http://www.lawrence.com/videos/indie/">Our ad</a> was specially crafted by our crackerjack marketing department, and was meant to offend only commie unionizers, the black-hearted Hun, and those damnable Sooners. -homies