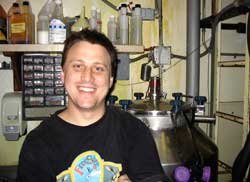 Geoff Deman, one of the men behind the glass, the Free State Brew Man Group 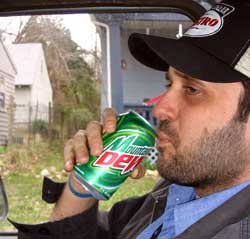 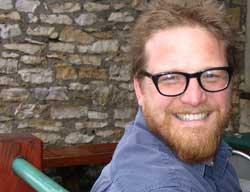 Currently reading: Occidental Mythology," by Joseph Campbell "It gives you a lot more insight into the prehistory of Christianity."

One book everyone should read: "Thus Spoke Zarathustra," by Friedrich Nietzsche "I think everybody needs to be challenged these days."

Do you have a contact name , number, e-mail, etc. for Manheim Steamroller? I am with a Sioux City non-profit music series and we are trying to contact them with quesitons as to a possible performance. Thank you. -Jean

The calendar: The image of the superhero flying into the yonder mistakenly touted the Decemberists show happening on April 5th. It was meant to ballyhoo the SUPERHERO ART!!! show currently on display at hobbs.
The cover story: The "shows" box at the end of our "Good Guys" story boasted an erroneous occurrence. Those of you who went to the SUPERHERO ART!!! show hoping to view the premier of a feature-length film produced in Lawrence were sorely disappointed by the absence of such a film. We apologize for the extremely unsuperness of our gaffs. Must have been the kryptonite. Or the gin.