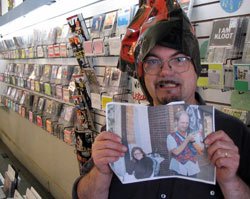 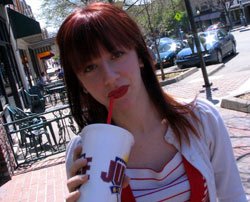 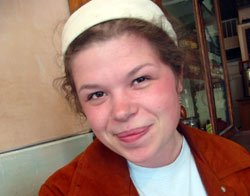 Currently reading: "The Amazing Adventures of Kavalier & Clay" by Michael Chabon "It's about people who write comic books for a living," Grunau says. "It was a really good summer read."

One book everyone should read: "The Partly Cloudy Patriot" by Sarah Vowell "She's an essayist; a lot like David Sedaris," Grunau says. "It's really informative in a non-schoolish, non-bookish way."

Homies All,
Thank You, And Your Teams Too,
For The Good And Positive That You Do.
Found Out About You,
On, National Public Radio.
Please See Our,
"Saint Patricks Day Social Security Plan"
At http://vote2006.tripod.com/plan.html
And The Other Good Stuff Around The Site.
Thank You.
-John

Dear John. . .
Thank you for the sweet poem. When we recite it, we like to say, "National Public Radi-oo."
It makes it rhyme better, and it sounds more homey. And thanks for the website link. The denim background is the perfect compliment to your barely concealed paranoid delusions and messianic fantasies, and we share your view that coming to some sort of point after 10,000 words would be too predictable. Thanks again.
-homies