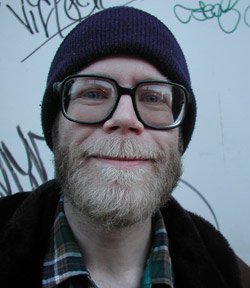 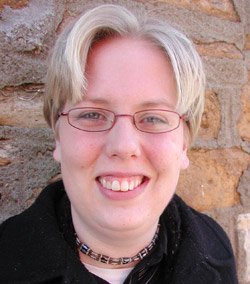 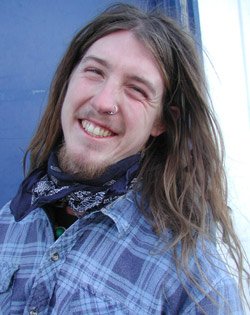 Andrew Hansford, Gypsy traveler on the road for two years, who passed out in the wrong house in Durango.

Currently reading: One Man's Meat E.B. White It's a collection of essays written in the Thirties, right before WWII. He lives out in the country on a farm next to the sea. He writes about chickens and eggs, Daniel Webster's hay fever, pacifism in the face of war. He's satirical without the taint of sarcasm. I think it's really beautiful.

One book everyone should read: Johnny Got His Gun Dalton Trumbo It's about a WWI veteran who's lost his face and all of his limbs. He's lost everything except his sense of touch. He learns about life by vibrations and feeling the sun. Off the hook imagery, incredibly vivid. The pace of the book is a slow grind - the whole thing takes place in somebody's mind. Sometimes it's nearly insane. Which begs the question of what's sane. Not a book for comfort.

1. Six Degrees of Ovulation
2. The Two Gentlemenses of Vagina
3. Theater in the Mound
4. Box Seats
5. Raising the Meat Curtain
6. Phantom of the Ovary
7. Joseph and the Amazing Technicolor Dreamcooter
8. Gynos and Dolls
9. Who's Afraid of Vagina Warts?
10. Waiting for Aunt Flow
11. Beauty and the Yeast
12. Vaginas! Vaginas! Vaginas!
13. Viva vulva
14. The Fallopian-tasticks
15. Soliloqueefs
16. Mama Labia!
17. The Producers (of eggs)
18. The Nutcracker
19. Clitoris Christ Super Star
20. Euphemism on a Hot Tin Roof