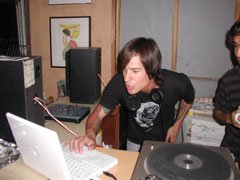 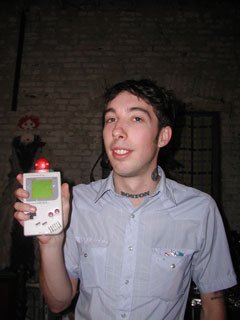 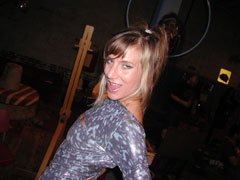 Currently reading: "The Humble Little Condom: A History" by Aine Collier "It's not humble--it's a really long book about condoms. It's gotten very tiresome. They talk a lot about STDs, and I've learned about syphilis being a pox and spreading all over the globe. It first showed up when Europeans came to the new world and the Portugese brought it back. As it spread through different countries, they called it the 'Portuguese disease,' then when it got to France it became the 'French disease,' and so on. It spread all the way to the East, and it has many different names. Back then, condoms were known to prevent syphilis, but they lost that reputation in America and became known primarily as a contraceptive device and people got upset by that--you know how Catholics are."

One book everyone should read: "Ishmael: An Adventure of the Mind and Spirit" by Daniel Quinn "It teaches you about natural law and about what's happening to the planet. It makes so much sense. If everyone read it, maybe we'd return to a balance with the world instead of spreading like the plague that we are. It's told from the third person perspective of a talking gorilla."

Number of years the universe has been in existence: 6,010 (a once widely accepted figure put forth by Bishop James Ussher [1581-1656])

Rank of the United States in the Reporters Without Borders 2007 Worldwide Press Freedom Index: 48

Rank of Eritrea, a small country in East Africa, among 169 countries: 169

Rank of Iceland every year since the index was first published in 2002: 1

Number of feet a dolphin can jump out of water: 20

Number of stomachs a dolphin has: 2. (One stores food and one digests it.)

Percent of Kansans who are of German ancestry, the highest ancestry demographic in the state: 25.9

Percent of Kansans who are of Irish ancestry, the next highest demographic: 11.5

Years during which a state board censored films in Kansas: 51