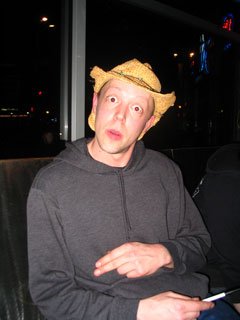 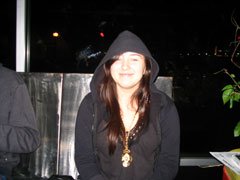 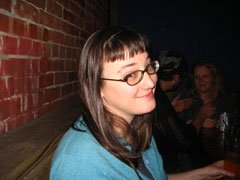 Currently reading: "The Gutenberg Elegies: The Fate of Reading in an Electronic Age" by Sven Birkerts "It's about the degradation of reading in the modern age and how computers are taking over literacy. I was required to read it in high school, but didn't appreciate it at the time, so I'm rereading it now and appreciating it in the way I felt it needed to be appreciated. Basically, the overall theme is that folks are more apt to seek an online source rather than a printed source. Although it doesn't deny that the internet is a force to be reckoned with and that it's very beneficial that encyclopedias are a thing of the past."

One book everyone should read: "Till We Have Faces" by C.S. Lewis "If you like 'Lord of the Rings,' you're in. If you don't like 'Lord of the Rings,' you're in. It's a book that basically follows the life of a young woman that falls into the life of royalty but is hideously deformed. She is destined to rule, but because she's considered ugly she is surpassed by her younger and more beautiful sister. It's about the deformed woman's quest to be recognized and respected for who she is and what she knows. She fights for it and she gets it. She fights against the 'gods,' she fights against her family, and ultimately she wins because she's the smartest and she's the best for it. It's a pagan, pseudo-feminist work by C.S. Lewis. It's basically a science fiction fantasy, and I have yet to find a Christ allusion in the book-which is unusual for C.S. Lewis."

1. Refuses to wear American flag lapel pin
2. Holds crotch instead of heart during National Anthem
3. Prefers shopping at World Market instead of Mall of America
4. Bowls like a Frenchman
5. Melts down flag lapel pins into arrowheads and goes bow hunting for bald eagles
6. Thinks poor people taste "bitter" when ground into soylent green
7. Will name Jeremiah Wright to newly created cabinet position, "Secretary of God Damning America"
8. Thinks Christianity is inferior to Muslim version of NAMBLA
9. Will socialize medicine-at hammer and sickle point, if necessary
10. Michelle Obama says she'll be proud of America for the first time in her life when she's allowed to punch old people for wearing flag lapel pins
11. Wants to suspend Christmas as a federal holiday, replace it with Louis Farrakhanukah
12. Plans to sell Kansas to Tony Rezko, convert it to massive al Qaeda theme park
13. Doesn't drink Busch Light
14. Can windsurf and eat expensive cheeses simultaneously
15. Blew up flag lapel pin factory with the Weather Underground in 1969 when he was 8
16. Has aggressive "Surrender to the terrorists in Iraq just to spit on the graves of our troops" platform
17. Will outlaw guns, except for the express purpose of shooting Bibles
18. Watches and understands "The Wire"
19. Will take away your SUV and make you drive a windmill to work
20. Blames 9-11 on flag lapel pins

Number of Iraqi refugees since March 2003: more than 2 million

Number of Iraqi refugees admitted into the United States between March 2003 and March 2008: less than 5,000

Number admitted into Sweden in the same period: 34,000

Number of Iraqis admitted into the United States in January: 375

Number that will have to be admitted each month to reach President Bush's stated goal of admitting 12,000 by the end of the current budget year: 1,562

Percent of whites who say they're personally offended by the Rev. Jeremiah Wright's sermons: 54

Percent of blacks who say they're personally offended: 29

Percent of voters who say Barack Obama's race will hurt his chances of becoming president: 21

Percent of voters who said this in January: 25