Kelley Hunt doesn't mind breaking music industry rules. She acknowledges that being a woman from Kansas who writes and records her own blues material is an anomaly. 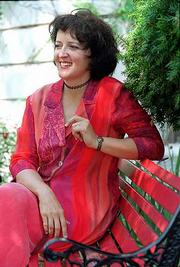 But she also admits that her latest endeavor is a groundbreaker -- even for her.

Hunt has released her new CD, "Inspiration," on 88 Records. It's unusual for performers to release a second album that's a live performance of all original material, but that's what Hunt decided to do.

"It seemed like a natural process for me, but I do a lot of things out of the ordinary. I'm not normal," Hunt said with a laugh.

Her CD was recorded at Lawrence's Liberty Hall, 644 Mass., and at Grand Emporium in Kansas City, Mo. An additional performance of "Love Never Dies" is on the CD, and was recorded during a broadcast of National Public Radio's "A Prairie Home Companion" show.

"Inspiration" features Hunt's trademark R&B and rock material, and she had her reasons for recording the tracks locally.

"Liberty Hall is a real comfortable place for me, and the Grand Emporium has a really high-energy level. It's always a raucous place to play," she said. "I wanted to be able to relax, have fun, and have this be an authentic performance in front of people I knew."

Fans' comments at shows and via e-mail convinced Hunt it was the right time for a live performance CD.

This CD is the follow-up to her debut "Kelley Hunt," which also was released on 88 Records. That CD enjoyed strong sales and featured the single, "I Don't Dance," which was used in the film "Dance With Me."

"Inspiration" is available at Lawrence music stores. It is set for a national release Aug. 11. It can also be ordered on the Internet through Hunt's Web site, www.kelleyhunt.com.