The basic T-shirt makes a comeback

Philadelphia — To borrow a line from Stevie Wonder, it's hotter than July. And in these steamy, sticky days of summer, casual men's fashion has gone from trying too hard to not trying at all. 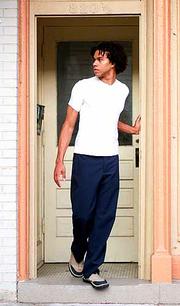 Those splashy Hilfiger T-shirts and flashy Fubu jerseys have yielded to the basic white undershirt, a fashion staple that didn't go away as much as it went undercover.

In this latest evolution, the undershirt emerges once again as the outer layer. Think manly muscled sleeveless tanks, like the kind Denzel Washington wore in "Devil in a Blue Dress." More memorably, think James Dean in classic white undershirt, blue jeans and red jacket in "Rebel Without a Cause."

Or Marlon Brando, in "A Streetcar Named Desire," bringing the undershirt into the cultural consciousness with his bulging biceps and rolled-up sleeves, all the better to store his pack of cigarettes.

Then came the tie-dyed T's of the '60s (hey, they've made a comeback, too, but that's another story), the colorful silks of the disco era, and on to the pricey, designer-conscious shirts of the '90s.

The 2000 version of the white T-shirt doesn't speak to anything more than simplicity. It's comfortable, versatile and cheap.

"Goes with everything. Comfortable. Thinner," was how Jay Gethers, 15, summed up his decision to sport a white Fruit of the Loom with a pair of dark-denim shorts and white Nikes on a recent summer afternoon. "You can wash it and wear it again, or you can just throw it away."

We are, after all, living in a disposable society. The affordability of the T-shirts (they usually cost from $6.99 to $9.99 for a pack of three, cheaper if you catch a sale) means that they could conceivably be tossed out after a couple of wearings.

Some people actually do toss 'em.

"Sometimes I wash it, but it's better when it's fresh out of the pack," says Jahleem Ali, 19, of Philadelphia, who favors his undershirts oversize, with crisply pleated sleeves, the whiter the better.

"It's comfortable, it's easy to match up color-wise, and goes with just about everything. In the wintertime, I wear a long john under it. So basically, yeah, I wear one all year-round."