By By Gerard O'Leary - The Associated Press

New York — Although Iron Maiden wants to reclaim the title of "heavy metal gods," don't expect the swashbuckling Brits to fit into the rock industry's "flavor of the month" mentality. 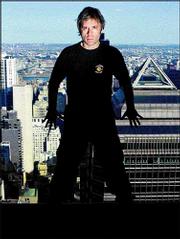 Bruce Dickinson, lead singer of the rock band Iron Maiden, poses for a photo in New York. Iron Maiden has a new album, "Brave New World," which brings the band back to its vintage roots.

"Iron Maiden writes songs that our fans enjoy," explained lead singer Bruce Dickinson in a recent interview. "We're not going to compromise our sound to try to fit into the trend that's popular today and then gone tomorrow."

"Brave New World" (Columbia) brings the group back to its vintage roots, from the opening power chord of "Wicker Man" to the intricate time changes of "Ghost of the Navigator."

Producer Kevin Shirley, who has worked with Aerosmith and the Black Crowes, was the catalyst for Iron Maiden's return to its original style.

"The album captures the essence of the Maiden sound," Dickinson said. "Kevin Shirley has gotten the band to sound like it sounds in a room or rehearsal studio playing live. ... Iron Maiden is a live band, and Kevin brought us back to it again."

"The chemistry for this album blended perfectly," he said.

The band toured nonstop, topping the British album chart in 1982 with "The Number of the Beast." Because of the album's title track, about the Antichrist, the band was falsely tagged as a satanic group, a label it has shed over the years by avoiding such topics.

Throughout the '80s, Maiden pumped out hit after hit, including "The Trooper," "Flight of Icarus," "Wasted Years" and the fan favorite "2 Minutes to Midnight."

The band's popularity grew when it began incorporating synthesizers into its sound. In 1988, the album "Seventh Son of a Seventh Son" confirmed Iron Maiden's position as Britain's top metal act.

Dickinson left in 1993 to pursue a solo career. He returned last year.

"Journalists ask me if I think I saved Maiden, but I tell them that's not why I'm here," he said. "Maiden was doing fine without me. There is an energy and vibe that didn't exist before, but I'm not here to save Maiden because then it's destined to fail."

All the stops on the 1999 summer tour sold out, something that hadn't happened in years.

"That tour was the best tour I have ever had," Dickinson said. "It was one of the few tours I just did not want to end. The energy and the vibe flowed right into rehearsal for the new album."

Dickinson shrugged it off.

"We don't judge our success or failure on the number of units we sell in America," he said. "This band does good business in other parts of the world, like Brazil, Japan and Europe."

Iron Maiden begins a U.S. tour this month, including a performance at New York's Madison Square Garden Aug. 5 that sold out in two hours.

"We sold out the Garden before, but never this quick," Dickinson said. "We were told that the demand was immense, so we will try to head back to New York before the end of the tour."

As for the band's legacy?

"I've had fans come up to me and tell me that they've had life-changing experiences listening to Maiden," said Dickinson with a smile. "It makes you think how special this band is."