Baldwin — Thirty years has passed since the artworks of Jon Keith Swindell and Chris M. Gregory have mingled. But the two college friends have reunited for an exhibit at Art Affair, 622 High. 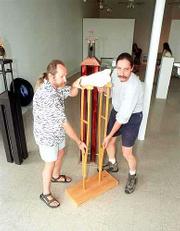 Chris M. Gregory, left, and Jon Keith Swindell, who are old college buddies, are exhibiting their art together at the Art Affair in downtown Baldwin. Swindell is an artist and Kansas University design professor, and Gregory is an artist living in Tuscon, Ariz.

Titled "Prairie Skies and Desert Stones," the exhibit includes integrated light pieces and marble sculptures, and points out just how far the two artists have traveled on their artistic journey since their college days.

Gregory, who now lives in Tucson, has never exhibited his sculptures outside of Arizona. Swindell, an associate professor of design at Kansas University, typically exhibits his work in museums rather than galleries.

"This is a gesture of good will between friends," Swindell said of the exhibit.

Swindell and Gregory met while students in the late '60s and early '70s at the Columbus College of Art and Design in Columbus, Ohio.

"We were both on the Dean's Crew and designed and built exhibition furniture and props for the art school," Swindell recalled.

At the Ohio college, Swindell concentrated on his training as a designer while Gregory was into conceptual art. Since then, the artists' creative paths have taken some twists and turns, drawing them into other media but never losing sight of their need for artistic expression.

After receiving his bachelor's degree in design, Swindell worked as a free-lance illustrator for 10 years before enrolling at the University of Nebraska-Lincoln to earn a master's degree in sculpture. After teaching in Nebraska and Washington, he was hired at KU in 1986.

"I left the applied art world and for the last 20 years only worked with sculpture, drawing and studio-based work," he said.

Swindell said his sculpture has "been a journey through time, frequently tied to my family and personal history."

Swindell's mother was a World War II war-bride from Northampton, England. His father was a B-17 flight mechanic stationed nearby with the 8th Air Force. Many of the narratives for his artworks involve stories of war-time England and the psychological horrors imposed on loved ones during the conflict.

In the 1990s, Swindell traveled to England to research a project based on his mother's view of her life. She had been diagnosed with Alzheimer's disease, and Swindell was trying to bridge the gap between recent history and his mother's lost memory of another life and identity.

Some of his works in the Baldwin exhibit -- "portals," or images surrounded by thick frames and incorporating integrated neon light -- are based on the diaries of British World War II women that are housed in an archive at Sussex University, outside of Brighton, England. "Rapture Portal/Olivia Cockett," for example, is an account of a backyard bombshelter during the Blitz in London.

In his artist's statement, Swindell explained: "Essentially I am attempting to pose this question: 'Are our memories facts from the past or creations from the present?' Like snatches of a song, a scent or a name almost remembered, are we caught in a dreamlike space between illusion and reality?"

Like Swindell, Gregory's works also deal with loss. Strongly influenced by the death of a close friend from breast cancer, his sculptures are chunks of native Arizona marble that have been carved into images of breasts.

The sculptures combine his interest in archeology and his need to express his grief and loss over his friend's death.

"I used breasts in a way almost like archeology -- the chipping away of the stone as a way of finding some sort of artifact or meaning of life," he said. "Part of the sculpture is unfinished stone -- a fossil of flesh."

Gregory, who received a master's degree in fine art from the University of Notre Dame and studied at the Whitney Museum of American Art, began his career in performance art and video installations.

"I got fed up with the art world," he said. "I was going through a divorce and couldn't express my emotions."

Gregory turned to writing music and playing in bands. He developed an interest in nutrition, Eastern philosophy and genetic expression.

"Ten years ago I moved from Seattle to Tucson, and decided to get back into sculpture," he said. "I was impressed by the expressiveness of Rodin. " His pieces are so sensuous and they captured the feel of the figure. " I wanted to do stuff that was meditative and more traditional."

Gregory is starting to do more full-figured sculptures. His most recent pieces are based on the neck, mouth and head.

"I'm trying to show something producing sound that's being silenced," he said. "So I have some slits in the throat to reveal the vocal cords."

His pencil "curiosity" drawings reflect his interest in genetics: images of Siamese twins and what they might look like in the future.

"The process of making art is sacred," he said. "Unexpected things happen (when you're creating it), and it keeps you in touch with a higher creativity."