By By Neil Bibler, The Associated Press

Phoenix — The images cover everything from the real and mundane to the glamorous and bizarre.

There's a weathered farmer in a field, an infant suckling a famed mother's breast and a performance artist buried so that only her head and shoulders protrude from the ground. 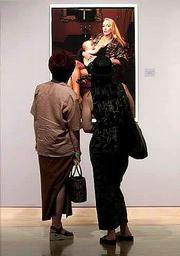 Visitors at the Phoenix Museum of Art view "Mother & Son," a portrait by Annie Leibovitz of Jerry Hall and her son Gabriel Jagger, in Phoenix. The portrait is part of Leibovitz's exhibit, "Women," which runs through Sept. 24. It then goes to New York for nearly three months, with Miami, San Francisco and Seattle to follow.

This is the way portrait photographer Annie Leibovitz has chosen to celebrate women for a touring exhibition titled simply "Women," a collection of dozens of photos presenting a varied panoply of its subjects.

The exhibition, made up of about a third of the nearly 170 photos in Leibovitz's book by the same name, was first assembled under the auspices of the Corcoran Gallery of Art in Washington, D.C., and displayed there through February. It opened a national tour July 29 at the Phoenix Art Museum, where it will remain through Sept. 24. It then goes to New York City for nearly three months, with Miami, San Francisco and Seattle to follow.

From all walks of life

Leibovitz reached national prominence with a photo of John Lennon and Yoko Ono on the cover of Rolling Stone shortly before Lennon was shot to death in 1980. She spent a decade with the magazine before moving on to Vanity Fair, Vogue and other activities.

Though much of her early work was journalistic, Leibovitz has not merely recorded American culture but has been helping make it from the outset. A Vanity Fair cover depicting actress Demi Moore nude and pregnant is only one example.

"Over her career, which now spans 30 years, she has become a real icon-maker," Phoenix Art Museum Director Jim Ballinger says. "Part of that's due to the great quality of her work in itself, but also because it's been her fortune to work with high-profile magazines. That enables her printed work to reach such a broader audience than would a museum show."

Novelist-critic Susan Sontag, whose essay accompanies the photos in the book, came up with the concept, and Leibovitz undertook the project with a typical combination of hesitancy and ardor.

These photos, Leibovitz says, show "how we look and what we do" -- a collective portrait of women and their roles today in America.

"I'm very moved by the sense of dignity these women have," the photographer says.


We assume a world with a boundless appetite for images in which people, women and men, are eager to surrender themselves to the camera. But it is worth recalling that there are parts of the world where to be photograph-ed is something off-limits to women."ï¿½ novelist-critic Susan Sontag

"The camera shows us many worlds, and the point is that all the images are valid," says Sontag, who grew up in Tucson and Los Angeles. "A woman may be a cop or a beauty queen or an architect or a housewife or a physicist."

They all appear in the book.

The images include a portrait of Supreme Court Justices Sandra Day O'Connor and Ruth Bader Ginsburg that resembles an Old Masters painting, and the everyday simplicity of Osceola McCarty, a Mississippi washerwoman who gave her savings to charity.

Hillary Rodham Clinton is there, as is former first lady Betty Ford. So are tennis stars Serena and Venus Williams with an in-your-face stare. Three members of a Crips gang's female auxiliary seem to be giving the viewer dismissive looks.

So do portraits of Las Vegas showgirls -- in their costumed splendor next to their ordinary daily selves.

"Any large scale picturing of women belongs to the ongoing story of how women are presented, and how they are invited to think of themselves," Sontag wrote.

"We assume a world with a boundless appetite for images in which people, women and men, are eager to surrender themselves to the camera. But it is worth recalling that there are parts of the world where to be photographed is something off-limits to women."

In the show, the prints themselves are huge -- as large as 6 feet by 8 feet -- and were produced by what is known as the Iris process using computers, watercolor paper and special inks.

Among the results are a velvety surface appearance when viewed from a few feet away and a visual depth of virtual dimension. Neither is apparent in the glossy pages of the book.

That the tour opened in Phoenix was partly a matter of luck and partly of connections. When the decision was made to take the exhibition on tour, the Phoenix museum happened to have a staff member in Washington.

"We pleaded our case because if we didn't squeeze it in now, we couldn't handle it at all because of our future bookings," Ballinger says. It helped that the museum had showcased a 1992 Leibovitz retrospective and had long-standing links with the Corcoran.

Ballinger says the exhibition and book "show the total transcendence of her work."

"I see it as almost a millennial celebration of American women," he adds. "To be able to go from coal miners to show girls to athletes to political leaders is outstanding."