New York — Next month, Chris Noth will take the stage of the Victory Theater as a character who's clad in arrogance and ambition, never mind a well-tailored suit. At one point, he'll put this character's mindset into words, saying, "I know how to maneuver, I know how to win."

Yes, "Mr. Big" is going to Broadway, but in a whole new guise. 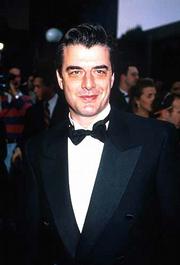 Actor Chris Noth is shown at the 1997 Emmy Awards. Noth, best known for his roles as Det. Mike Logan on NBC's "Law and Order" and Mr. Big on HBO's "Sex and the City," is headed for Broadway to star in a revival of Gore Vidal's play "The Best Man."

Noth, who has been experiencing some overdue fame as the elusive Mr. Big on HBO's "Sex and the City," brings a touch of marquee value to Gore Vidal's "The Best Man," a Tony-nominated play when first staged in 1960. The revival is scheduled to open Sept. 17.

Noth's sleepy sex appeal should serve him well in the role of Sen. Joe Cantwell, a loathsome bigot vying with a seemingly better man for his party's presidential nomination.

"It's good for the part," Vidal said in a phone interview. "After all, Jack Kennedy got in on his looks, specifically how he looked vis a vis Nixon in the debates."

But Vidal denies that Noth was cast because of his popularity in "Sex and the City."

"That is totally irrelevant," he snapped. "The man's got a record of quite serious work. I think he's going to be extraordinary."

Noth said he would not have been offered the role of Cantwell if "I had not gotten some fame."

And he went on to say, "I find the part very difficult, actually."

But it's not so much a technical problem as a political one.

Cantwell, he said, is "the antithesis of what I believe in. It was appalling for me to watch the Bush nomination speech and see a little kid saying something like, 'It's time for them to go,' pursing his lips and trying to act tough. I thought he needed a spanking."

Convinced that he is a true man of the people, Cantwell is out to destroy his patrician opponent, a former secretary of state (played by Spalding Gray). In the play, the era in which the drama unfolds is described as one of "gossip instead of issues, and personalities instead of politics."

True then, truer now. (Vidal chuckled ï¿½ a scary sound ï¿½ when I mentioned this to him.)

"The essence of politics never really changes," said Noth. "It's all about power, ambition, greed, deception, manipulation. And, then, maybe a little bit of the democratic process gets thrown in."

Noth was fresh from a rehearsal and still buzzing when I met him at an Italian restaurant in the Theater District. The place in question is an old haunt of his and fellow actors from when they partnered on "Law & Order."

It was that series that first bought Noth attention. He shot the pilot in 1988 and it was picked up by NBC in 1990. It was a new kind of crime show, gritty and procedural, the brainchild of producer Dick Wolf. It was exciting and confrontational. On the set, too, apparently.

"There was a lot of psychological warfare on 'Law & Order,' Noth recalled. "We were all contentious, all outspoken, and everyone was fighting for any shred of character to be had."

As Det. Mike Logan, Noth was the show's designated hunk, and, as cast members came and went, seemingly its designated survivor. But in 1995, Wolf fired him, telling the press he wanted a younger man in the role. Benjamin Bratt replaced him.

Despite the criticisms and tensions, Noth and Wolf revived Logan for "Exiled," a 1998 television movie that Noth co-scripted and Wolf produced.

Other projects Noth worked on included a TNT movie, "Rough Riders," and the play "Patronage," which opened at the Ensemble Studio Theater in 1997.

His career had not gone cold, but neither was it hot. Noth claims now that he was not worried.

"I'm thickheaded. There's no security in life. I was living my life like a lot of other actors looking for a job."