New York — The guy on the other end of Vincent D'Onofrio's cell phone has no idea how much trouble he's in. 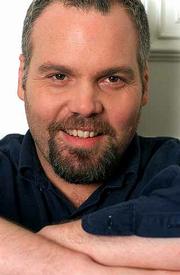 Actor Vincent D'Onofrio is a character actor who has made a career playing losers and misfits. In two current movies, he plays a sadistic serial killer who drowns and bleaches his victims in "The Cell," and he portrays '60s anti-war radical Abbie Hoffman in "Steal This Movie."

"If you think I'm joking, you haven't dealt with me before," the actor bellows into his receiver like a bear whose winter nap has been interrupted.

"I'll be there soon, you know. And if I look you in the eye and I know you're lying, there's gonna be hell to pay," D'Onofrio says, straightening his 6-foot-3 frame.

The offending party, a publicist from Los Angeles, has apparently not stunned D'Onofrio with his skill promoting one of the actor's latest offerings, "Steal This Movie."

A choice selection of expletives later, D'Onofrio hands the phone to a worried-looking publicist. Then he levels his gaze at a newcomer.

"Honest to God, it's not like I'm banking on 'Steal This Movie' to make my career," he says. "I've got a career, thank you very much. But if you're going to get involved in a project with me, then do your job right. Right? That's it. That's all I'm asking."

Forgive D'Onofrio his snit fit. This is, after all, a guy who puts his own body on the line for his films ever since he debuted in "Full Metal Jacket" by gaining 70 pounds.

"He's an artist, in the best sense of the word," says "Steal This Movie" director Robert Greenwald. "He commits to the creative process, wherever it takes him, whatever the toll it will take. He just won't let go of the muse."

D'Onofrio's muse is an odd lady. He's gone from playing a lovesick fisherman in "Mystic Pizza," to a bumbling Mob accountant in "Feeling Minnesota," to a young Orson Welles in "Ed Wood."

So far, his most notorious role is the intergalactic cockroach who slips on ï¿½ very awkwardly ï¿½ the skin of an unlucky farmer to battle Will Smith in "Men in Black."

"I don't have to worry about box office receipts," D'Onofrio says happily. "It's not like the studio guys sit around and say, 'We've got to put out a D'Onofrio movie this year!' I'm allowed to jump around and be eclectic."

These days, he's taking oddness to a new high. In addition to portraying a counterculture peacenik, D'Onofrio goes medieval in "The Cell" as a serial killer who drowns and bleaches his victims.

"At least it shows my diversity as an actor," he laughs. "At least it does that. I'm not sure it's a great plan of the studios, but that's not my business."

His business, he says, is looking "for stories that I can dive in, places that I haven't been before. The only thing you can be sure of is that I will continue to act. That's the thread that connects my work."

Born in New York and reared in Hawaii, Colorado and Miami, the 41-year-old D'Onofrio cut his teeth at New York's American Stanislavski Theatre, dabbling in stage work and student films.

During down times, he was a bouncer at clubs and a bodyguard for such notables as Yul Brynner and Robert Plant.

By the time Stanley Kubrick picked him to play a chubby, whacked-out recruit in 1987's "Full Metal Jacket," D'Onofrio realized that the key to success was to transform his towering presence.

"I can change my size so much. I can look like a whole different guy," he says, still chunky from having gained 40 pounds for an upcoming movie with Val Kilmer.

"I think it really comes down to not being a really good actor and needing to be confident that my persona suits the part. When I walk down the street in real life, the vibe that I give off has got to suit the characters that I'm playing."

And what characters they've been. Look for him in "The Player," "Mr. Wonderful," "The Whole Wide World," "Dying Young," "The Newton Boys," "Strange Days," "The Thirteenth Floor" and even "Stuart Saves His Family."

Ask him how he views these smaller, supporting roles and D'Onofrio chuckles. "The first thing you have to know is that you have to look at a story like it's a canvas, like a painting. It's like Character Acting 101."

Lesson One: "You have to realize where your character is within the structure of the story. Maybe it's like a splash of yellow paint in one corner of the composition of the painting," he says.

"The minute you start to try and become something that you're not, it goes in the direction of faking, of pretending. That's good for sketches, but not good for drama."

His impromptu lesson over, D'Onofrio picks up his cell phone, says good-bye and prepares to get back to work: It's time to knock heads with Los Angeles again.