Lance Fahy is not your run-of-the mill Lawrence folk musician. With an increasing reputation as a live performer, a recently released CD, and a bluesy, grassroots sound, the 28-year-old singer/songwriter/guitarist is carving out a serious niche in the regional music scene. 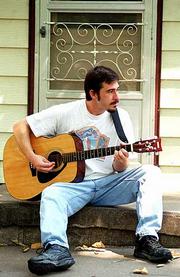 Fahy sat in a downtown pizza joint during a recent interview, discussing life in Lawrence, his grassroots approach to music and songs for sale.

He started playing guitar in 1982.

Fahy said, "I really didn't take it too seriously at first. I'd say some point in high school, I started seriously playing and really wanting to do something with it."

Fahy's early influences include everything from Petty to Phish.

"I've been exposed to a lot of different kinds of music," he said. "I think whether I liked him or not, I was always sort of a Tom Petty fan because I heard him on the radio a lot. So, you look at his influences Â Bob Dylan and the Byrds Â you get older, learn a little more about that."

A huge Rush and Pink Floyd fan in high school, Fahy got into R.E.M. for a while and, more recently, has latched on to obscure Johnny Cash songs.

Fahy said that while there's still good music in Lawrence, there's not as much as there was 10 years ago. He blames it on society's growing attachment to electronics.

"Where people used to want to go out and play a sport, or swim or play music. Now, there's more 'let's play video games,' 'let's e-chat,' 'let's e-mail each other.' So, I just think in general there's not the nightlife that there used to be."

Clubs that used to do live music, don't anymore because of the growing expense, Fahy explained. It's gotten more expensive to run a bar Â "you have more insurance, you have stiffer penalties and there's not as much play money," he said.

"Â For a lot of club owners, live music has become a cost that they don't want to deal with."

Lawrence musician Lance Fahy has released a CD titled "Songs for Sale." Fahy, shown in his back yard, describes his music style as an acoustic mix of rock, folk and country.

He believes that Lawrence, with its highly-acclaimed music scene, can be a difficult realm for local musicians, who are forced to compete with a continual influx of national touring acts.

Fahy should know. He gigs in local "variety rock" band Good Advice and continues to play solo sets throughout the region.

"I think there's a lot of really talented music here," Fahy explained, "but I don't think it's very well promoted from within. A lot of the bar owners and promoters are really interested in the bigger shows and the bigger money. So, what happens is that a lot of times the smaller, local musicians don't really get anywhere. You can get a gig in Lawrence. But, it's hard to get paid or get regular bookings."

Fahy released the independent "Songs For Sale" earlier this year, a collection of originals recorded in his own living room.

"I wanted to do something in the most simple, basic, grassroots way possible," Fahy said. "Â All of it's one-track, live recordings. I had a DAT machine and used my little PA head mixer amp. I stuck, in some cases, just one air microphone out. In other cases, two or three microphones. I just kind of experimented."

"Songs," with its sparse sound and earthy tones, may herald a mini-revival of the lost art of single-microphone recording.

"It's the principle of simplicity," Fahy explained. "It was kind of a challenge to myself. If I was going to go somewhere and play by myself, what would it sound like? Eventually, the challenge was to do a whole album that way and I consciously decided not to do any overdubs on this album."

"Songs For Sale" is an evolution of Fahy's music, an evolution that will continue undoubtedly for years to come.

"Whether the song is about a real-life event or if it's just to be funny or sarcastic, my writing style has gotten a lot deeper," Fahy said. "My voice has certainly gotten a lot stronger, so I sing different styles of music."

He said he wants to continue with similar principles to the 'Songs For Sale' album such as home recordings, on-site recordings and live performances.

The goal: "Try to keep it fairly grassroots."