Memphis, Tenn. — Memphis was a city in ancient Egypt, so it seems fitting that its Tennessee namesake boasts its very own pyramid ï¿½ in this case The Pyramid, a 12,000-seat arena. 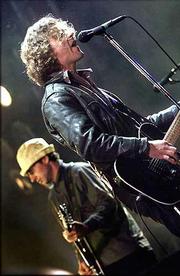 Pearl Jam's Eddie Vedder plays at an outdoor rock music festival in Roskilde, 18 miles west of Copenhagen, Denmark. Eight fans were trampled to death during the concert June 30. The band paid tribute to Elvis Presley during a concert at The Pyramid in Memphis, Tenn.

From outside, The Pyramid is a marvel of modern architecture and the third largest pyramid in the world. Inside, though, it's just another concert barn ï¿½ Crayola-hued seats, pushy security and $7 beers.

Sonic Youth kicks off the evening with a typically-eclectic set of its patented art rock scuzz, but the audience's allegiances clearly lie with the headliner. They clap patiently and await the arrival of the only band to survive grunge intact.

Without warning, the lights go out and Pearl Jam quietly takes the stage, melting into the opening strains of the first number. "Last Exit," a song written in reaction to Kurt Cobain's 1994 suicide, takes on new poignancy in light of Pearl Jam's recent tragedy in Europe, where nine fans were crushed to death as the band performed. "Let my spirit pass," singer Eddie Vedder howls into the void as the group (including former Soundgarden drummer Matt Cameron) makes whipping posts of its instruments.

Vedder seems to be addressing the issue via the set list. "Animal" is next up, with Vedder screaming, "Why would you want to hurt me?" as if he'll find an answer between the lines of the song's raging groove.

"It's nice to be here," the singer mumbles a few minutes into the show. "Uh, actually, it's great to be here. I hope everyone's found a spot. I hope you're comfortable in the space you've found." It's as close as he'll come to addressing the European tragedy tonight, but it's enough. The audience goes out of its way to keep things calm and moshing is kept to a minimum, partially out of respect for the band and partially due to the over-zealous Pyramid security.

The scraggily-bearded Vedder is mostly somber this evening, eschewing the high-swinging, crowd surfing antics of the group's early tours. In fact, Vedder rarely moves an inch from his center-stage spot, planted in front of the microphone like an oak tree swaying in a summer storm. Fortunately, Vedder has the vocal prowess and stage presence to make this work and it actually intensifies his performance. Vedder's staunch stance forces the crowd to lock that much harder onto his lyrical turns of phrase and mayhem practically ensues each time the singer takes a step or raises a hand.

And, mercy, what a voice. Vedder's gravy-thick, moonlit voice is in perfect form tonight and he dispenses the majority of his energy via his golden throat ï¿½ shuddering, shaking, shivering and soaring, often within the space of a few lines.

Pearl Jam's song selection is unimpeachable tonight. The band skips many of its hits and well-known material (no "Jeremy," "Alive," "Daughter" or "Last Kiss" in tonight's show) and concentrates on songs that really matter. "Go," "Nothingman," "Do The Evolution," "Tremor Christ" and "Dissident" are extracted from the group's sonic treasure chest and given an airing. Rarely-performed tracks like "State of Love and Trust," "Wishlist" and "Elderly Woman Behind The Counter In a Small Town" also are on tap this evening, as are popular numbers like "Better Man," "Black" and "Even Flow." Mostly, the band stays away from material from its recent "Binaural," although an ethereal "Nothing As It Seems" and a few others make their way onto the Pyramid stage.

Pearl Jam's Memphis concert wouldn't be complete without some kind of reference to Elvis, especially given that midnight marks Presley's birthday. Vedder dons a flashy jacket and a pair of gaudy Elvis sunglasses and dedicates the next number to "The big E in the sky. I know he'd like this one ï¿½ probably sing the hell out of it." The band cartwheels into a galloping version of "I Can't Help Falling In Love With You," complete with over-the-top karate poses and hip-shaking lip sneers from Vedder. It's an odd moment, but one that works for its sheer goofiness, and goes a long way towards lightening Pearl Jam's otherwise bleak mood.

A final encore of The Who's "Baba O'Reilly" is powerful, if obvious ï¿½ Pearl Jam's been playing it as an encore since 1991. Though Pearl Jam's popularity has declined precipitously during the years, it's willingness to experiment and refusal to buy into the music-industry machine has made it an increasingly compelling band. Though rumors of a breakup abound, Pearl Jam's passion, commitment and sincerity were on full display in Memphis and one hopes the group will struggle through the trials and tribulations of recent months.