By By Jeff Baenen 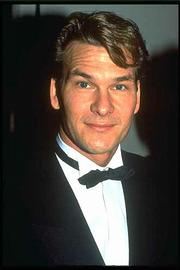 Patrick Swayze gained fame for his legwork and virile good looks in "Dirty Dancing," then starred in films such as "Road House," which has been rated the cheesiest movie by author Michael Nelson.

"I can't define why it's good," Nelson said in an interview. "It takes itself very seriously. At least all the actors weren't in on the joke, unless they were pulling off a really, really good joke. It's unbelievable, the archetypes they have in place and they play it dead straight."

In "Road House," Swayze plays a bouncer and N.Y.U. philosophy student summoned to clean up a bucket-of-blood bar outside of Kansas City.

Sam Elliott plays his grizzled mentor, Kelly Lynch is the doctor who tends to Swayze's wounds and falls in love with him, and Ben Gazzara portrays the corrupt town boss.

"I've been finding more and more people who've been coming up and saying, 'It's on TNT every week and I see it on and I flip by it and then I just keep watching, even though I saw it the week before.' It's like, 'What's wrong with me!"'

Nelson concludes: "It draws you in, there's just something so funny about Ben Gazzara going down the road in his big open car, singing, 'Yah-dah-dah-dah-dah-dah-DAH!' It's so absurd."

"The other thing that's appealing about it," he adds, "is that they assert ï¿½ again, with a straight face ï¿½ that there's a famous bouncer. It's like, he shows up, and people know who he is. Wait a minute ï¿½ they don't circulate pictures of bouncers. ... But they recognize him. How?

"And every bouncer asserts that the best is the guy that Sam Elliott plays. He's a scrawny old guy. He's the best? No one can beat him up? I mean, come at him from behind with a bottle, and he's not the best bouncer any more."