Stars come out in Washington

Washington — American movie icon Clint Eastwood and ballet dancer Mikhail Baryshnikov, a Soviet defector during the Cold War, took their place Sunday with three other master performers from the worlds of film, stage and music as Kennedy Center honorees. 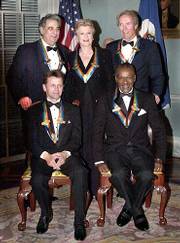 "Each in their own way, tonight's honorees have brought to a venerable art form a spark of the new and unexpected and each has left it more modern, more brilliant and forever changed for the better," said President Clinton as he led the applause for the 2000 Kennedy Center Honors recipients at a White House reception.

It was followed by a two-hour gala in the Opera House at the capital's showcase performing arts centers.

In fleeing to the west, he said Baryshnikov "soared out of the Soviet Union into our hearts."

He called Berry, who wore a black brimmed cap with gold braid, "quite simply one of the 20th century's most influential musicians" and thanked him for "making us laugh, making us dance and making us happy."

Making a political pun, he said of Domingo, one of opera's best known tenors, that "these days a lot of people are talking about the need to change the tenor of Washington ï¿½ but they are not talking about Placido Domingo."

Eastwood, who bucked the evening's dress code by appearing in white tie in a black tie crowd, was described by Clinton as "a star for the ages."

Lansbury, he said, "left her childhood home in England to become American royalty."

The evening's main event, a fund-raiser for the Kennedy Center, will air Dec. 27 on CBS.

Highlights of the careers of the five honorees:

l Berry, 74, was hailed as the poet laureate of rock 'n' roll and an influence on musicians for the last 40 years.

l Domingo, 59, has sung 115 roles on the operatic stage, more parts than any other tenor, and has more than 100 recordings to his credit. He is now musical director of the Washington Opera.

l Eastwood, 70, shaped himself into a film-world icon as the archetypical icy-eyed Western gunman. He is recognized both for tough guy movie roles and for his career as a film director. He won the Academy Award for best directing in 1992 with "Unforgiven," which also won the best picture Oscar.

l Lansbury, 75, won several Tony awards for performances in "Mame" and "Gypsy" on Broadway, and Oscar nominations for her movie roles in "Gaslight" and "The Manchurian Candidate." Her popularity soared when she starred in the television series "Murder, She Wrote."