The year in local music

In a year when the pop charts didn't have much to offer, the best music was often made by local artists whose commitment to art for art's sake provided much-needed relief from the world of thong songs and shaking bonbons.

Looking back, it was a great year for the area music scene, as more and more artists seemed to have something to say. Strong releases from Becky and Melineh, Coyote Project, Connie Dover, DVS Mindz, Gooding, Holstein, Esoteric, Lance Fahy, Podstar, Proudentall, Sturgeon Mill, Ruskabank and The Band That Saved The World underscored the talent and variety that exists here.

"This is the center of the country," says Straightjakkett, one of the four MCs in DVS Mindz, which opened for the legendary Wu Tang Clan in August. "We get a little bit of everything. I don't even call it the Midwest. It's the Mid-Best to me. If you come from the Midwest and you're real about it, people will know. It doesn't sound like the East Coast or the West Coast."

Highly anticipated second albums by The Creature Comforts and The Appleseed Cast proved worth the wait. Both bands breezed by the sophomore slump with works that built upon their previous efforts and then surpassed them. 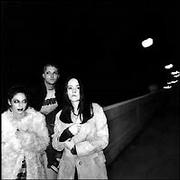 "It seems like everybody's really doing what they want and everyone seems genuinely supportive of each other," Creature Comforts singer/guitarist Chris Tolle says of the diversity found in Lawrence music. "I think there's a nice comfort factor when all the bands don't have to be alike to be supportive or be friends. I don't think bands around here are very self-important, and that makes it a good place for musicians. There's not a lot of prima donnas or attitudes."

The Get Up Kids made waves nationally with the Heroes and Villains/Vagrant Records release, "Something To Write Home About." Various members of the Get Ups branched out with equally-interesting side projects, including full-length releases from The New Amsterdams and Reggie and the Full Effect. At year's end, the band was tapped to open for Green Day on a leg of its upcoming tour. Also on The Get Up Kids' label is Lawrence's The Anniversary, who released "Designing a Nervous Breakdown" then toured Europe with the Kids.

Ultimate Fakebook signed to 550 Music, a division of Sony/Epic, and re-released its masterful "This Will Be Laughing Week" with new artwork and a couple of re-recorded tracks. The band then continued to build its considerable following via extensive touring throughout the United States and Europe, making thick glasses the rock fashion of choice from Lincoln to London.

"Everybody keeps asking us nonstop about the Kansas City and Lawrence music scenes," says UFB singer/guitarist Bill McShane. "They're hearing about all the bands like The Get Up Kids, The Anniversary, Appleseed Cast, Reflector, The Creature Comforts. It's really cool. It seems like a lot of people are really starting to poke their ears over this way."

Grunge rockers Paw returned from the dead with a new record, "Home Is a Strange Place," and a new lease on life, proving that you can teach an old dog new tricks as long as its name is Jessie.

"When the band was first starting, there were a lot of good rock 'n' roll bands in town," says Paw frontman Mark Hennessy. "We had good forms of every music Â good reggae music, good jam bands. Every genre had a rich mine to draw from and there was always something good to see. There were bands that I would see that I was jealous of. People took it really seriously, too. Nowadays, there's fewer bands, and fewer of them have that sort of eye-on-the-prize attitude. When we were doing it, their intention was to make it as a band. Now, it seems like there are more hobby farmers out there."

There were a few major losses too: Frogpond broke up, Wormwood moved to Seattle and Becky and Melineh disappeared from sonic radar. But, like Paw, there is always a chance of these acts making a welcome comeback. Music fans and musicians alike bemoaned the lack of live music currently found in Lawrence venues and hoped that The Cathouse . . . sorry, I mean The Outhouse . . . will return to its live music roots.

"There's not very many hardcore bands around here," says Cory White, guitarist for The Esoteric. "It's mostly indie rock bands. Getting gigs is easy, but getting people to show up is harder. People aren't looking for metal out here; you kind of have to force it down their throat. We used to play at The Outhouse a lot, but that's gone too."

Lawrence DJ Chris Choun (aka DJ Coleco) decries the lack of venues for drum and bass, acid jazz, jungle, etc. "I don't think there are any good venues," Coleco says. "You can go to a club, but there's so much busy activity going on. You go to parties Â warehouse parties rented out for one night Â but everybody's just on mad drugs so it's not much fun. All the parties get busted or there's some kind of drama."

Holstein's Dave Brodie agrees: "It seems like there isn't a big enough population to sustain all the local bands and the national acts. I mean, you can only go and see music so many nights a week."

What 2001 has to offer is anyone's guess (we're all still keeping our fingers crossed and our ears open for something new by Kill Creek), but one thing's for sure: the greatest hidden treasures are often buried.