For nearly 15 years, Buffalo Tom has earned a reputation as one of the most honest, hard-working acts on the college-rock circuit.

Formed by guitarist Bill Janovitz, bassist Chris Colbourn and drummer Tom Maginnis at the University of Massachusetts, the trio has continued to churn out the kind of passionate, guitar-anchored music that all but makes the band unplayable on today's prepubescent-aimed airwaves. 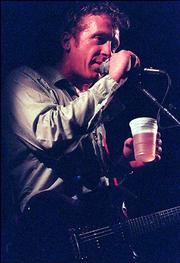 Janovitz's gutsy voice (he shares lead vocal duties with Colbourn) and dominant-but-melodic guitar work has helped the group erect a niche fanbase of international dimensions, and his literate lyrics (all three bandmates graduated U-Mass, with Janovitz earning degrees in communications, sociology and comparative literature) has made the act a favorite with critics.

The last few years have seen the trio retreat from steady public performances, with Janovitz embracing the hiatus as an opportunity to try his hand at being a solo artist. Now with the new "A-Sides From Buffalo Tom: 1988-1999," an 18-song collection of the band's best material, the three members have returned to playing a few key shows in support of the record without actually committing to a lengthy tour.

Speaking from his home near Boston, the 34-year-old Janovitz is quick to point out the ebbs and flows in his group's career since Buffalo Tom's eponymous first record catapulted the band to prominence in 1989.

Q:What's the secret to maintaining the same lineup for so long?

A:"I wish I could put it in words, because I could probably make some money (laughs). I haven't figured it out. We've probably come close to breaking up countless times, certainly in our own minds but literally with each other probably at least twice. If you're around a certain amount of time, you get over a hump and then there's no turning back. I don't think I could get rid of these guys, or they could get rid of me, if we tried."

Q:How does Buffalo Tom stack up against some of the legendary rock power trios such as Cream or Nirvana?

A:"We beat 'em all, I think (laughs). I don't know. You have to take each one. I think we were closer to Nirvana than Cream, not just contemporarily but in spirit. ... Certainly H?D?) the most immediate influence on us. We came from that school, the sort of wall of noise. It's kind of an overcompensation thing when you've only got three guys. Particularly with guitar, I developed a style through Buffalo Tom that filled up a lot of space ? a lot of open chords and stuff."

Q:What was the process the band went through for choosing the specific songs that ended up on "A Sides?"

A:"It was sort of a give-and-take between us and the label (Beggars Banquet Recordings). There wasn't much discussion. We were all pretty much on the same page ? the idea being singles. But we weren't really a singles band in the traditional sense. We didn't really have many hits. ... So some songs just by nature come up to the top whether or not they were singles."

Q:Is your ideal way of touring going out solo or with the band?

A:"I think with the band. I'm not the kind of person that loves to be alone, which is rare for a musician or an artist. Most (performers) say they want to be alone all the time. I've always been really afraid of being alone. ... Maybe it's because I'm from a big family, but I always want to share experiences. It's almost like the Zen question: If it was only me that saw it, did it really happen?"

A:"I don't know if it's lacking honesty. If you want to take individual examples, from what I know about Eminem, he seems like that really is 'Eminem.' I don't think he's being dishonest. Same goes for Christina Aguilera. I think Fred Durst might actually like the stuff he sings. But there is a ton of stuff that is bandwagon-esque, to use the Teenage Fanclub term. There are already millions of those bands that I can't differentiate. It makes me feel old."

A:"I had this job between years in college when I was down in New York working for my uncle. He gave me this cushy nepotism job where I was doing data entry for this insane amount of money for a 20-year-old college kid. I was working in an office, and I had no idea what I was doing. It was the first time I had ever touched a computer. I was messing up all over the place. ... At the end of it all, he took me out to dinner. I was thanking him for setting it up and all, and he said to me: 'Don't ever work in an office. You can not work in an office. You are horrible at it.' And beyond that he said, 'You should do what you love. Do music.'"

A:"Actually there's this band in Germany that named themselves Medfield, MA, which is the town that Chris and I lived, where our parents live. It's on the back of our first record as the contact address. There's already a band who've taken inspiration from us. And they've had some success in Germany. They probably sell more records than we did."