From a keyboard perched high within Kansas University's Campanile, Albert Gerken has been sending melodies out across the hills of the campus for 37 years.

Helen Hawley plays the carillon in the bell tower of the Campanile at Kansas University.

His music and his instrument are fixtures in university and Lawrence culture. Graduating KU students pass through the bell tower's base on their way down the hill to Memorial Stadium. Attentive listeners, casual wanderers and Frisbee players have enjoyed Gerken's tunes from the ground below.

At summer's end, he'll play his final recital as university carillonneur. Gerken, also a professor of music and dance, is retiring.

Helen Hawley, one of six carillon students studying with Gerken, will play a recital Sunday as a tribute to her teacher.

"He's made tremendous contributions to published music for the carillon," Hawley, also an organist at Plymouth Congregational Church, said. "I'll be playing some of his published work."

Gerken declined to be interviewed. He's a modest man, Hawley said, and he doesn't want to make a big deal about his retirement.

Gerken plays two 45-minute long recitals a week -- on Sunday afternoons and Wednesday evenings -- when school is in session.

His instrument resonates from the top of a 120-foot limestone tower. Fifty-three bronze, cup-shaped bells dangle from a wooden framework near the ceiling. The largest bell weighs seven tons and the smallest 12 pounds. That's the difference between a large African elephant and a small dog.

From the playing room -- which is 77-stair steps from the base of the tower -- Gerken sounds the bells by compressing wooden batons or keys with the sides of his hands, or sometimes with his fingers for chords. Foot pedals operate the lower octaves.

The keys and pedals are connected to rods that are fastened to clappers, which strike the bells. The heavier the bell, the more resistance a carillonneur encounters when striking that key.

"It takes some strength," Hawley said.

Fortunately, she said, the playing room is air-conditioned and heated.

Beyond weekly recitals, Gerken also plays for visiting dignitaries and special events, such as KU's graduation ceremony each May.

Gerken has been a member of the Guild of Carillonneurs in North America since 1962. He has been the featured recitalist and lecturer/clinician at Guild congresses and has appeared as a guest recitalist throughout North America and Europe.

Gerken has premiered new carillon works and several have been dedicated to him. Many of his own compositions, arrangements and collected works are widely performed.

"He's got a world-class reputation," Hawley said. "He's in demand to play recitals here and abroad."

In addition to being a world-renown carillonneur, Gerken also trains students to play the unique instrument.

Sharon Hettinger, who's been studying with Gerken for 10 months, said mastering the carillon goes well beyond reading organ or piano music. It involves ringing the bells to get the optimum sound, she said, rather than clanking or causing abrupt stops in the tone. 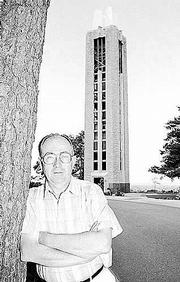 Retiring carillonneur Albert Gerken poses with his instrument in this file photo.

"It's a hard thing to teach," she said. "It's a lot of patience on his part and skill at trying to describe the phenomenon in various ways so that students understand how it sounds and how to get that sound."

Hawley said Gerken not only taught students how to play the carillon but also how to play it musically.

"He teaches students how to shape musical phrases by controlling dynamics," she said.

A room below the playing chamber contains a practice instrument -- designed to the specifications of the carillon -- that students can use to learn new music without an audience.

The hourly chime heard on campus is set to a timer, but other music heard outside of regular recital times usually is produced by practicing students. Sometimes, students play the weekly recitals in Gerken's place.

Because the carillon position is not a full-time job, Gerken also has taught music theory classes during his KU tenure.

Mark Holmberg, the university's assistant carillonneur and an associate professor of music theory and composition, said Gerken would be a tough act to follow.

"I've had nothing but a wonderful working relationship with Bert," he said. "He is truly probably one of the top four or five carillonneurs in the country -- without a doubt."