Rosemary Murphy doesn't think people should go to great lengths to find beautiful landscapes. For her, the countryside that surrounds Lawrence is full of views that lend themselves to her watercolor paintings. 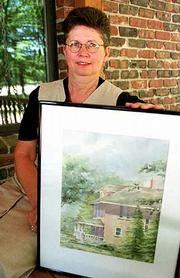 Baldwin artist Rosemary Murphy has devoted her time to painting scenes that most northeast Kansas commuters drive by every day. The end result of her work is showcased in her exhibit, "Ordinary Places and Other Blessings," which opens Friday at Baker University's Art Affair Gallery in downtown Baldwin. The exhibit runs through Aug. 11.

Most people think that only the extraordinary qualifies as art, but Murphy knows better.

"I think people tend to spend a lot of time looking for the extraordinary, and they miss the ordinary things that are beautiful," she said.

The Baldwin artist has devoted her time to painting scenes that most northeast Kansas commuters drive by every day. The end result of her work is showcased in her exhibit, "Ordinary Places and Other Blessings," which opens Friday at Baker University's Art Affair Gallery in Baldwin.

The exhibit runs through Aug. 11.

All of the paintings are watercolor landscapes of places in and around the Baldwin-Lawrence area. Murphy's convinced that one doesn't have to travel far to find good art settings.

"We drive back and forth, and I see so much that interests me. Most of the artwork (in the show) is of places within 10 to 20 miles of here," she said.

Many of the scenes are of common places that Murphy tries to give a new look to. In one picture she painted the Vinland Fairgrounds. Only in her watercolor, she painted it during the off season, when it was void of carnival patrons.

"I loved that simple view of the fairgrounds, and that's the way it is most of the year. It's very quiet, only most people never see it that way," she said.

Murphy has painted for more than 25 years, but it was two years ago when she decided to pursue her art full-time.

Before then she taught secondary students in Montana, and her last six years as an educator were spent teaching Baldwin elementary students. She earned her bachelor's degree in painting from St. Mary's College in Leavenworth.

Rosemary Murphyï¿½s works are in two exhibits this month in Baldwin:ï¿½ ï¿½Ordinary Places and Other Blessings,ï¿½ which runs Friday through Aug. 11 at Art Affair Gallery, 616 High St.ï¿½ Postcard Series XXII exhibition, which runs through Aug. 5 at Solomons Antique Gallery and the Discoveries Gallery.

As an art teacher, Murphy taught a variety of mediums to her students, but her own personal work always revolved around using watercolors.

Her routine is to try to paint each day, working off pictures and sketches she's made of areas that she's visited.

It's hard for her to set a schedule because she never knows how long it will take her to scout a location.

"I might see something, look at it, go back several times, take photos, maybe do two or three drawings, or even a small advance watercolor before I ever really start painting something. So it's difficult for me to set the number of hours I'll put into a painting," Murphy said.

Murphy has exhibited her work in Colorado shows and in Baldwin, but this week marks a pivotal time for her. Not only is she having her own exhibit, but one of her works is also on display in Baldwin as part of the prestigious Postcard Series XXII exhibition.

Now in its 22nd season, the event is sponsored by the Association of Community Art Agencies of Kansas.

The latest exhibit was juried in 1999 and features two-dimensional works by 26 Kansas artists, including one by Lawrence artist Lora Jost. The paintings are shown throughout the year at various galleries and museums across the state. The exhibit will be shown through Aug. 5 at Solomons Antique Gallery and Discoveries Gallery, both in Baldwin.

Of the 26 selected works, 16 are printed as postcards and sold at state art galleries and museums.

Murphy was one of the 16 artists selected for the postcard reproduction. Her award-winning painting, "Late in the Day," features a small white farmhouse at dusk. The farmhouse is between Baldwin and Eudora.

"I just really like how the light hits light-colored buildings," she said.

Murphy also does stained-glass designs for churches. She sees a similarity between painting in muted watercolors and in designing color schemes for glass.

But the end result is the same. Murphy wants her work to have a calming effect on viewers. She wants them to take a moment from their fast-paced lives and see the natural beauty that surrounds them.

"I like to paint quiet, peaceful places, and that does seem to speak to people," she said. "Sometimes it's not so bad for people to look at art and find something peaceful."