A breeze from the past

Once the workhorse of the farm, windmills have become pasture art

There is something soulful about the sounds that come from an old farm windmill when it strains to stand up to a Kansas wind. The galvanized metal blades, steered by a wobbly tin fin that used to bear the name of its maker, screech and moan as they slowly turn and pick up speed.

Their purpose was to drive a hand pump at the bottom of a skinny-legged tower, which in turn filled a livestock tank with well water.

Old Dempster, Aermotor and Monitor windmills lay on their sides in a farmyard alongside U.S. Highway 36, 12 miles west of Seneca. Mark Kuckelman, right, buys and sells old windmills. He watches as his grandsons ï¿½ Drew Kuckelman, 8, center, and Kelton, 10 ï¿½ play on the old wind machines.

In the late 1800s and about halfway through the 1900s, windmills were a working part of most rural landscapes. After World War II farm ponds were found to be an easier way to quench a cow's thirst. Most old windmills became pasture art, left to rust away in the elements.

But to many youngsters of this and earlier generations, a windmill, combined with a vivid imagination, could easily become a mast on a pirate ship or a hand-operated flying machine.

Along with supplying the muscle for water pumps, windmills made lots of memories.

Mark Kuckelman, 75, has a thing for windmills. He's been buying and selling them near his northeast Kansas home in Axtel for the last 20 years. Axtel is about 10 miles south of the Nebraska state line.

"For years I sold Firestone tires out of Marysville and traveled through six or eight of these counties in Kansas and Nebraska and got to know a lot of people," Kuckelman said. "When someone in the area has a windmill they want to get rid of, they just give me a call."

Kuckleman uses a 1972 John Deere tractor and a flatbed trailer to retrieve windmills.

"I've driven that old tractor 60 miles to take-down and haul a windmill."

He hasn't sold tires since his retirement in 1981 but he still likes to talk about his old job. 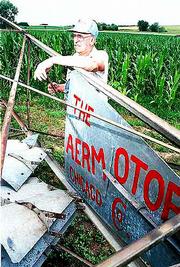 "Aermotor has the best galvanized metal in them," says Mark Kuckelman as he leans on one of his old windmills. "The tail section is a popular target for country shooters."

"You don't have to be smart to sell tires, you just have to give good service," Kuckelman believes. "They used to send college boys out with me to learn how to call on customers.

"One time I got a call at 2 a.m. from a farmer-customer of mine, and he said he had two tires blowed out on his fertilizer spreader. It was sitting in the road, and he was afraid someone might run into it."

He got out of bed, delivered and mounted two new tires and had a customer for life.

He remembered another time when he and some bowling buddies were on the highway late one bitter-cold night and they spotted a loaded cattle truck with two flat tires sitting off the highway.

"We stopped and I told the driver I sold Firestone tires, and he told me his boss was a Montgomery Ward guy," Kuckelman recalls.

"I told him if he could get Montgomery Ward out there in the middle of the night to fix his tires I'd mount 'em free. I got the nicest letter from that truck owner you ever saw," Kuckelman remembered with a smile.

He says changing 15 or 16 truck and tractor tires in an afternoon has taken a toll on his back and a few other parts of his body.

The used windmill business has proven to be less strenuous and comes with an eclectic clientele.


In case you're in the market for a new or used windmill, looking for parts or are just curious, these are a few contacts:ï¿½ Mark Kuckelman, Axtel, (785) 736-2912.ï¿½ Verdun Company, monitors windmills, parts and supplies. P.O. Box 1481, Hutchinson, Kan. 67504, (316) 662-8502.ï¿½ Big Country Windmills, new and used windmills, towers and parts, P.O. Box 43, Maxwell, Neb. 69151, (308) 582-4451.Want to read more about windmills? Type "windmill" into www.google.com or another search engine on your computer and stand back. There are many links.If you're in the neighborhood of Kendallville, Ind., north of Fort Wayne, you can stop by the Mid-America Windmill Museum, the only known operational museum of its kind in the United States.

"Some people want them to decorate their farm or business or front yard, and not long ago I got a call from a guy in Kenya who wanted to buy 10 of them to use on his land to pump water for his livestock."

Kuckleman advertises his wares in a couple of widely circulated magazines.

Metal windmills are still manufactured today and are easy to buy. The price tag for a new Aermotor windmill with a 12-foot fan goes for nearly $3,000. The tower can cost an additional $1,700 to $1,800. "Pre-owned" versions in Kuckelman's used-windmill enterprise go for $600 to $750.

He laughs when he says it's a good thing he's not in the business to make a living.

"A guy called me from Idaho and asked me to ship two windmills to him by truck and I had to haul them to Fairbury, Neb., to get them on a Freightliner (truckline), and the shipping alone cost nearly $450."

On a recent afternoon, the former tire salesman is seated on a windmill tower lying on the edge of a corn field and starts chuckling as he watches his two grandsons climb on his inventory.

"The other extreme from shipping by truck was an older couple from Michigan who stopped by one day. They were on vacation and were driving a mid-size car. They wanted to take the windmill with them," Kuckleman recalled.

"We sat out here and took every bolt and nut off that windmill and they got the whole thing in the trunk of their car. They had to put their suitcases in the back seat, but they were really happy to have that six-footer."

The fan portion of a windmill can range from 6 feet to 12 feet in diameter and upward. Most of Kuckelman's towers are 28-feet to 30-feet tall when the legs are bolted together. Other parts of the country have taller or shorter towers depending on the terrain.

U.S. Highway 36 runs east and west past the farm where Kuckleman sells his windmills and pumps. There are no signs, only windmill parts on a trailer parked by the road and the complete versions lay in the grass on up the driveway.

"That two-lane highway is one of the busiest in the country, and it's my best salesman. When people are out looking for windmills, and it's usually the wife who wants one, they don't drive on interstates," Kuckleman said.

"You just never know how things are going to turn out," he said, watching his grandchildren run between rows of green corn. "My wife and I got into windmills together and I lost her to cancer in '98. We were married 48 years. With all my ailments I just never dreamed I wouldn't be the first to go."

He pointed out an array of pumps from small ones to the larger variety used under windmills.

"There must be a hundred brands of pumps, and they were all manufactured ... from the Midwest to the East Coast. Most of the ones you find these days are minus the handle cause that's probably the first part that walks away from an old windmill," he said heading for his pickup.

His shiny red pickup had a handsome hand-painted windmill on the driver's door. He gives out business cars that say "Mark Kuckelman " Windmills and Hand Pumps."

"Give me a call if you run across an old windmill that someone wants to get rid of."