"I like to say I work with four materials of any scale -- glass, plastic, water and ice," artist Dale Chihuly says. "But it is really light that makes those materials come alive." 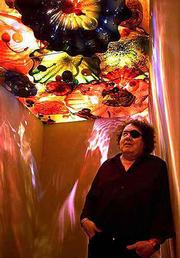 Artist Dale Chihuly, of Tacoma, Wash., stands underneath one of his works, ï¿½Persian Pergola, 2000,ï¿½ at the Knoxville Museum of Art in Knoxville, Tenn. His show at the museum runs through Sept. 10.

And light seems to glow from within the billowing and undulating shapes now on display at the Knoxville Museum of Art in a show titled "Dale Chihuly: Installations." The exhibit opened this month and continues through Sept. 10.

The 59-year-old Chihuly, a native of Tacoma, Wash., is regarded as one of the world's leading glass artists. His work can be found in more than 170 major art museums around the world, including the Helen Foresman Spencer Museum of Art at Kansas University. His pieces have been shown in the Louvre, along the canals of Venice, in the vineyards of Napa Valley and the Citadel of Jerusalem.

This exhibit of some 15 installations is ever changing. Some old pieces are reconstituted. Others are new, including a 12-foot-high hanging sculpture containing 800 swirling curlycues called "Fiery Scarlet Tower," a freestanding design he calls a chandelier.

Visitors seem enchanted, museum curator Steven Wicks says. "The word I hate but have heard so much is 'awesome.' People are blown away when they come in to see the work."

Chihuly, who wears a black patch over the left eye he lost in a traffic accident years ago, makes very few of the objects himself these days. Instead, he directs teams of glassblowers and other assistants, some 150 people in all.

"I direct the team and make whatever it is I want to make," he says, comparing his role to an architect, film director or symphony conductor. "You have to be able to communicate to let people working with you on the team know what it is you want to do."

Still, he admits it is an enterprise full of the unexpected.

"There is an element of surprise, especially in the way I work because I work with techniques or elements that are more chancy," he says.

To learn more about the Dale Chihuly exhibit and the Knoxville Museum of Art, point your browser to www.knoxart.org.

"I don't use a lot of molds or a lot of tools so it has a natural feel. I use centrifugal force and gravity and fire. I use those elements to shape the glass."

The exhibit has a variety of examples of his freeform style, from large white baskets resembling the woven work of American Indians to large glass orbs that look like fishing-net floats. There are spears erected teepee-like, flowery stems coming out of huge vases and teardrop forms floating across the walls.

A colorful melange of hundreds of big and small pieces covers a clear glass ceiling he calls "Persian Pergola."

As for inspiration, Chihuly doesn't have to look far in Washington state.

"I suppose one of the things that inspires me the most would be nature," he says. "A lot of my work looks like if you ran across it in the forest or something that you wouldn't know if it was manmade or made by nature."

The popularity of his work has grown gradually. He didn't sell his first piece until 1976, and his first public installation wasn't until 1980.

"I think all artists come up with ideas and new things," he says. "You just have to decide what to pursue and what not to. That makes the difference between a lot of artists. Whether the artist has the ability to know when they are doing something that is good or important, and whether to continue it or whether to stop."

Chihuly stayed with his passion and has found a wide audience.

"An exhibition like mine often brings in people who don't necessarily go to museums," he says. "They find glass very intriguing. There is something about glass; its transparency when the light goes through it. People want to see it; collect it.