Feet do the painting for tango artist

Passion for dance comes through on canvas

Buenos Aires, Argentina — Guillermo Alio rolls up his pant legs and laces up his black leather shoes. He ties a long, white handkerchief about his throat and sets a black sombrero jauntily atop his head. 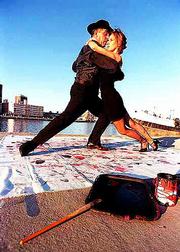 Argentine artist Guillermo Alio and his dance partner, Pascal Coquigny of France, paint as they dance in Buenos Aires, Argentina. The tango, which has been caught on film, in music and in dance halls the world over, is now being caught through the paint-splashed soles of Alioï¿½s feet.

On this day, Alio unites art with his other passion: the tango.

It is the dance of the Argentine soul, a soul that has been caught on film, in music and in dance halls the world over. And now the tango is being captured through the paint-splashed soles of Alio's feet.

But would Gardel ever have danced in latex paint?

The 50-year-old artist sways to the beat as he turns up a tango on his portable stereo and uses a screwdriver to pry open two cans of ordinary house paint -- one red, one black.

"The idea came to me one day to paint a couple dancing the tango, but without actually showing them dancing," Alio explains. "And that's when I had the idea of capturing their footprints -- not only their footprints, but how they danced, where they danced and the impression they left behind."

Alio pours red and black paint into separate pans, then tapes a large, white canvas to the floor. Meanwhile, his dance partner, Pascal Coquigny, in slinky black dress held off the shoulders with spaghetti straps, sits on a high wooden chair, pulling on black high heels.

Coquigny slides from the stool and steps gingerly into the pan of black paint, splashing her heels. Alio is much bolder, plunging into the red with zeal, turning his soles scarlet to the strains of a mournful bandoneon -- a sort of accordion that inhales and exhales the very essence of tango.

Then the two melt into the tango's embrace, dancing slowly at first.


ï¿½At first I thought painting with the feet seemed very crazy. But then I liked it a lot. In the beginning, you feel like you are walking on eggs. But then the music takes over and you let yourself go.ï¿½ï¿½ dancer Pascal Coquigny

Coquigny came to Argentina from France to learn to tango, and decided to stay on. She admits it took time to get her feet wet.

"At first I thought painting with the feet seemed very crazy. But then I liked it a lot," she says, speaking in French-accented Spanish. "In the beginning, you feel like you are walking on eggs. But then the music takes over and you let yourself go."

Ever faster, the dancers twirl, kick and dip, the passion of the music rising as they converge on canvas. Every few seconds they daub their feet in paint, sometimes red, sometimes black, as the melody and mood dictate.

The man leads, the woman follows, alternately courting and combatting each other in what is by turns a duel and a duet -- their heels striking out a near-photographic image of the encounter.

Following in their footprints

They are in Alio's studio just off the Boca waterfront where a century or so ago, generations of poor immigrants from Italy, Spain and central Europe landed penniless at dockside from ships and steamers.

Today, well-heeled tourists with camcorders slung about their necks throng the "Caminito," a cobblestone river walk where rusty red tugs are sunk at harbor, where tango once rang out and still does today. Nearby, the conventillos, or corrugated buildings that housed whole generations of immigrants, have been freshly painted in brilliant reds, greens and yellows.

Against such a picturesque backdrop, Alio is creating a canvas within a canvas. Such working-class neighborhoods of the early 1900s were melting pots for the immigrants, who legend has it, gave rise to the tango in the burdellos and dance halls of the Buenos Aires gone by.

Gardel, tango's first great pioneer, became one of the popularizing forces by 1917 and Argentines with newfound wealth carried the craze to New York and Paris where it became one of the favorite dances of the roaring '20s. Tango evolved over the decades, stepping to a new heyday in the 1940s and '50s as Argentines gave the musical form new modes of expression.

The idea for "painting" the tango came to Alio while he was traveling abroad. "I went to New York -- to Central Park -- and I took a piece of chalk and sketched out the steps of the tango on the sidewalk," he says.

He did similar sketches on sidewalks in San Francisco, in Florence, Italy, and in Barcelona, Spain. "Wherever I go, I would leave my sketches of the tango, and then I thought to myself, 'Why not leave the very footprints?'"

The red and black footprints sketched out by the dance leave Alio waxing poetic: The red, he says, symbolizes the passion of a woman while the black hearkens back to "El Guapo" -- "the Handsome One" -- who represents an immigrant who found the going tough after leaving his homeland and arriving in a new world.

"The melancholy of the soul is what pure tango speaks most about. But tango also speaks of many things: of motherhood, of friendship, of sport, of neighborhood, even of the horse races. It's something very profound," says Alio. "The tango is a reflection of all within man."

By the end of the dance, a canvas once pure and white is now etched with the staccato beat of the woman's smaller heels, and the crescent-shaped streaks of the man's larger shoes. It is a painting suitable for framing.

Such dancing is improvised, and each painting different.

"No two persons dance alike," Alio says. "My idea is to capture the speed of the feet, of the movements. It's like handwriting: A doctor writing out a prescription for a patient writes very fast. But someone else may write slower, differently."

And it is spontaneous.

One night at a dance hall where he performed, a blackout stopped the painting in progress. "It was a Saturday night and we were dancing. The lights went out and we had to do it all over again. But you know what? It turned out even better because none of it was planned," he recalls.

Not knowing what will happen next keeps the audience enthralled. "The reaction of the people is very powerful. They never know what it is going to happen between the dancers, the pans of paint and the canvas taped to the floor."

In the end, most people are surprised by how well two pairs of shoes can paint.

"The feet show what is going on in the head and heart," Alio says. "They are a means of expression and the world needs this dance, the tango, to understand what is within."