Artist 'horses' aruond with her art

Artist Nancy Christy-Moore never knows where her paintings will take her. In the past, they have tapped into her love of florals and interest in petroglyphs. Most recently, however, they have taken her back to her adolescence and her fancy for horses. 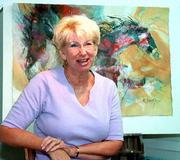 Nancy Christy-Moore talks about some of the paintings in her ï¿½Horseï¿½ series.

"I was a horse-whacky teen-ager," Christy-Moore said as she sat in her Lawrence home studio surrounded by paintings from her "Horse" series. "I ate and slept horses. We didn't have one because we couldn't afford one, but I knew how to draw them."

Christy-Moore describes her creations as "inner paintings." She begins by creating a nonobjective abstract "musing" with watercolors, acrylics and inks combined with oil pastels and sometimes rice paper collage.

"I pour the inks and acrylics (onto the canvas) and squirt water on them. I listen to weird music, and I have fun," she said.

Once the abstract work is done, she views it from a distance and allows her imagination and feelings to stir until she sees an image. Hidden among the colors and movement of her most recent abstracts are the images of horses, galloping with manes flying.

Once she imagines the images, she takes a twig, dips it in ink and draws what she sees in her imagination onto the canvas.

"It's more immediate and straight from my heart, and it generally comes out fine," she said. "It feels to me like it's being given to me. It's totally metaphysical, and that's the part I love. I never know what's coming.

" " Whatever we see, love or take in in this world is there subconsciously and will come out at the most unexpected times."

Christy-Moore has been painting most of her life. Her mother was a fashion illustrator, and early on her parents knew that their daughter had artistic talent. Her mother steered her into a commercial art career because it was more financially stable than the fine arts field.

Christy-Moore attended Columbia College in Columbia, Mo.; the American Academy of Art in Chicago; and the Art Center School in Los Angeles. But she could never bring herself to make a living as a commercial artist. Instead she worked for about 20 years in administrative and executive secretarial positions in Southern California and kept her art as a recreational pursuit.

"I came to a crossroads when I was approaching 40 and I decided I really wanted to paint," she said.

She began doing illustrative works and then oils on canvas. She later switched to watercolors when she discovered she was allergic to oil pigments.

She also realized she wanted to share her skills, and began teaching for Palomar College in several San Diego County locations and exhibiting her works.

Christy-Moore and her husband moved to Overland Park in 1994 and then to Lawrence last August. During those years she has taught adult art classes at Johnson County Community College and the Lawrence Arts Center and displayed her work in several galleries and shows.

Next week, she will open a month-long solo show at the Lawrence Public Library. In April she will have a solo exhibit of her "Horse" series at the Lionheart Gallery in Louisville, Ky., as part of the pre-Kentucky Derby celebrations in that community.

"The payoff for me is that I'm validated as a human being," she said. "My reason for being is to paint these images. It's exciting to create, and it's even more exciting when people connect with your images."