The band's piano player talks about its 'overnight success' 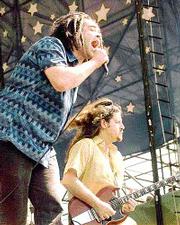 The band's sparkling debut, "August And Everything After," sold several million copies, making MTV darlings of the band and launching it into the perilous heights of superstardom.

Things have mellowed some since then.

The Crows' third studio release, "This Desert Life," is its most fully realized work to date, packed with the band's trademark songs of love, life and adventure. "Desert Life" was recorded, like the others, in a rented house. The rest of the band members -- Dan Vickrey, guitar; Ben Mize, drums; Matt Malley, bass; David Bryson, guitar; David Immergluck, mandolin, guitar and accordian; and Charles Gillingham, piano -- prefer it that way.

"We've just always done it," Gillingham explained during a recent interview. "It's different than a studio. You can go sit out on the lawn instead of sitting in the room with the Coke machine."

How did you first meet the other guys in the band?

I've known Adam for years, since like 1985 or so. Adam had a few bands before Counting Crows, and Dave Bryson and he were recording songs. They had an ongoing recording project that lasted years, and the final sessions were with me, Steve Bowman (former drummer), Matt Malley, David and Adam, and they liked that lineup a lot and so we decided to make a band out of that lineup. It was just a couple of months later that we had a record deal.

Yes, he was a very visionary producer, and he would tell us to change our sound and make it more interesting and individual. He really helped us to avoid just being a bar band and be a real band creating art -- art like no one's ever heard before.

How did the sort of "overnight success" of the first record affect the band?

It was weird. We weren't ready for it. We didn't expect it. We were expecting just to be a relatively small band. We knew that our music wasn't in style, but we loved it and we just wanted to play it. It was the last thing we expected, to be so mega-huge. And it all happened in just a few weeks. We went from selling a few thousand a week to selling 40,000 a week. It took five or six weeks to climb up the charts, so it was a very strange period. All the sudden you're on the cover of all these magazines and people are yelling at you in bars.

It was a very weird year, but that was a long time ago. It was weird for a minute, but now we're quite comfortable. We have a lot of people who like us and who've stuck with us, and the rest of the world's gone its way. So, we're doing great.

Was the second record a reaction to that initial success?

There were songs in there that were specifically about stuff that was going through Adam's head. It had to do with being a big star out of the blue and how weird it was for him. So, yeah, it's kind of a strange album.

I think this most recent one is our best record, but it's odd because as far as critical acclaim and success goes, it's the opposite. I would say our first record has a very definite thing to it. When you put it on, you can hear these feelings coming through and I like that, and I think it's a really good work of art. But I almost wish we could go back and redo the first one with the sonic palette that we have now.

The new record sounds almost like a combination of the first two.

We finally sound like we've always intended to. We finally figured out what Counting Crows sounds like. I think the first two records, you can hear us trying different things to see what we might sound like. It works in some ways, and in other places where I don't really think it works.

There's an intimate, emotional thing to the first record that was very deliberate, and we did that by playing extremely simply and putting the singer way up front -- trying to make it sound like you're in a room with the singer and the musicians are in the emotional background.

On the second record we wanted to do more instrumental stuff " but it's a little confused and a little loud. On this record the instrumental stuff is a perfect compliment to the song, and it's connected very deeply emotionally. I think some of our best songs are on this record. "Speedway" is one of my favorites. I love that song. I think it's one of the darkest songs we've ever written.

Are you working on material for the next album?

We were talking about that the last couple of weeks, thinking about writing. Adam doesn't like to write on the road. We've tried, but it never seems to work out. Adam writes in these spurts where he'll write eight songs in a weekend and then nothing for eight months. That's kind of the way he is.

When Counting Crows first came out, the band was embraced by MTV and the media. Has there been a backlash?

We're in a weird year, musically. We're in a period where the music business is fairly conservative. They've taken some big hits, and people aren't buying records anymore for whatever reason. People are playing video games and downloading music or whatever. So, the music business has kind of put its wagons in a circle and started putting out things they know will sell to young people. So, it's been a hard couple of years for a lot of bands.

The Counting Crows has released its third CD, "This Desert Life."

What's your take on the whole Napster issue?

Obviously with Napster, people are downloading music for free and artists aren't getting paid and that format can't last. But the whole thing with the Internet, from an artist's point of view, is that the deal we've gotten from record companies is very, very bad. Theoretically, we control the content, we control the actual art, and we should be able to control the lion's share of the money, but we don't. We get a terrible, paltry few cents for the music we produce.

The Internet, for us, is a chance to change that relationship and get people connected more directly with the band and not have to deal with paying for the office buildings and executive salaries that bands have to pay for now when they're working with a record company.

What we'd like to see is people going to the Counting Crows Web site to get our music. If we just controlled the whole thing that way, I'm sure it would be a better deal than the one we've got. On the other hand, with Napster, there doesn't seem to be any way to make money on that.

So, a new model has to be created. The ball is in the air, and it's about to come down, but we're sort of hoping that it will come down on the side of more control and freedom for the artists. The fact that the ball's in the air is a good thing for artists because we could use the change.

I know there's a lot of trading of your live tapes also.

Yeah, but that's OK because most people who listen to the live tapes already own the record. Bootlegging has never really been a real drain on the industry. Occasionally a great bootleg, like the Dylan '66 thing, he gets wise and puts it out. So, bootlegs generally don't hurt a band. The only issue for me, personally, is the quality. They're often not the best quality and they're often not the best sound, but there are a few out there that are really good.

I can't understand why anyone would want to listen to them. We DID improve on those! There were songs on there that didn't make the first record, and some of those demos are so old that they were made in like 1988. And you can hear it! You're like, "Oh, I remember the '80s." You got synthesizers in there and things that we've all long since moved past. Although, we're moving back to them!

What about "Einstein on the Beach?" Where did that come from?

That's one of those songs -- a song from the demo. I've played that song in my life exactly once. And the band has never played that song all in the same room. We were recording these songs and we just came in. Then it got released, which was really frightening.

It became like a minor hit and we were like, "Oh, my god." That's one of the many reasons that in the summer of 1994, we were going, "How do we get control of this stuff?" It was out of our control -- what people were listening to, what opinions people were forming of the band. Then you got a song like that out there.

We did approve releasing it, but we didn't think it would become a hit. It's definitely not what we're about. We've never released a song anything like that. But, whatever. All these problems are the kind of problems you like to have.