This is no mean feat, especially given his band's brief-but-storied history of internal and external strife. 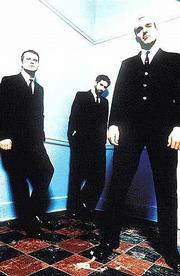 In the few years it's been together, the Seattle-based group has broken up several times, lost members to bigger bands (former bassist Nat Mendel is now a Foo Fighter), had a singer find religion and quit (only to rejoin later) and fought major battles with record labels.

Hoerner phoned on the eve of Sunny Day's recent tour -- to promote its new release, "The Rising Tide" -- to discuss the trials and tribulations of spending eight years as alternative rock's "next big thing."

Tell about making the new record.

It was great fun. We got to do a lot of experimentation and things in the studio that we've never done before. We wanted to see if we could go back to the seminal power-trio writing lineup. It's our best record by far. I can't wait to play these songs live. We're super-psyched right now to take this record out and break it. I'm as proud as I can be about the lyrics in this records. They're definitely the best lyrics I've ever written. So, I think that's going to be an important part of it and I really want people to get the lyrics and know what we're talking about.

Do you still enjoy touring?

" It does wear on you, but there's a lot of things that I do on tour. I write. I'm working on a novel and I just finished a book of short stories. I've always got to be writing. The guitar is how I maintain sanity and meditate. I usually write exclusively on acoustic.

Any plans to tour with Foo Fighters anytime soon?

Who: Sunny Day Real Estate, with No Knife.When: Sunday night.Where: The Bottleneck, 737 N.H.

Tour with Foo Fighters? They stole my (expletive) bass player and they won't give him back! We almost got him back. He quit for like two days, but then he went back. Sunny Day is a struggling rock band. It would be hard to walk away from being in one of the biggest bands around to being in a band that's definitely a struggling entity. So, I can't really blame Nate too much. Although, I wish that he would quit so that he could be in Sunny Day again.

You guys have had some serious trials and tribulations.

We definitely had some stormy weathers and we've weathered a lot of (expletive) together. I'm so glad about that now, man. You learn so much from going through (expletive) and we're still together. The bonds that form in that kind of fire are tempered to be quite a bit stronger. The three of us are so much stronger than we've ever been. It's fun to be in a unit that you know is totally dedicated to success now and to doing the band. We have a great foundation of music.

Would you ever consider signing with a major label?

We had tons of major labels in the running and Time Bomb came to the table with a sick contract. An amazing contract as far as points on the record, creative control, everything we wanted. Time Bomb has all the major-label backing, but then you also get to be the focus of the label. We could have been on Virgin or Capitol or Epic, but Sunny Day is kind of a struggling, smaller band right now and I don't want to get lost in the shuffle. I want the people who are working for us to be working for us.

Has the Internet been useful for Sunny Day?

I definitely think that we have a highly Internet-savvy audience. They definitely look out for Sunny Day on the Web. There's a lot of cool fan sites out there, too. The Internet is essential, really. An essential marketing tool, but it's also essential for maintaining contact with the fans.

What's your take on the whole Napster debate?

I'm kind of on the fence. Part of me thinks, "Yeah, anything you can do to destroy the machine. Steal whatever you can!" But then there's part of me that's like, "Well, they're stealing it from me." I mean, this is what I do and it's the only way I support myself.

So, if you like Sunny Day and you want Sunny Day to be able to keep making records, better records, then we have to have money. You have to buy the record, you can't steal it from us because if you do, I gotta give you props for ripping us off, but you're (expletive) us. We don't make any money, we can't make records in the studio or afford to go on tour. We offer free downloads of our stuff, anyway. But, if you're stoked enough on the band and you want the full package -- the lyrics, the artwork, everything that we've put into it -- then buy the CD. But, if you're totally broke and you don't have any money -- even though you have this like amazing computer and a bunch of blank CDs, you (expletive) -- then go ahead and steal it from me!

Our fan fans are going to buy our records. That was proved by the fact that Sub Pop ripped off fans by selling them the live CD and the live video -- two pieces of dog (expletive). So, there's definitely people who are going to buy our stuff. But let's say we're going to sell 200,000 records and 75,000 are going to get ripped off, that's huge to us, man. That can break Sunny Day. It means we can't afford to record the way we want to record or do all the dates we want on tour.

For a band like Sunny Day it's a heavy issue, but I could live the rest of my life on just the records that have been stolen from Metallica.

What happened with Sub Pop?

We finished our contract with Sub Pop when we delivered "How It Feels." But they still had some hooks into us. Very tentative hooks, but we didn't have the money to fight them off. So, to get out of the contract with them, we just agreed to tons of stuff.

They get tons of money from us and points on our records. They totally ripped us off. We were forced to put out a live CD and a live video, neither of which we had anything to do with other than allowing them to film us. It's a real shame. The quality of both of those products is utterly horrible and I never, ever want to put out anything that I'm not proud of. Sunny Day is important to me.

But couldn't you give them a live show that you were happy with and have them release that instead?

They had one show and that's the one they went with. And you know, I don't care. I don't want to give Sub Pop anything of me. I pretty much just stood there the whole concert. I wanted to just stare at the camera and mouth the words "(expletive) you" the whole show. But, it's impossible for me to do that. There were people at the show who had no connection to Sub Pop and are fans of the band. I didn't want to do anything to screw over anybody who likes Sunny Day.

So, Sub Pop put out these porno-quality horrible things exclusively and strictly to milk people who love Sunny Day for a little bit of extra money. They're trying to wring a little bit more money from Sunny Day. So, I totally hate both of those products and I feel very regretful that they're out there and I'm sorry to anybody who bought them who felt ripped off.

That's weird because you'd think that Sub Pop would be more supportive of its artists.

Sub Pop is all about the bottom line. All about grabbing what they can grab and that's the way it is and if you don't like it, "(expletive) you." It was horrible. It was the worst experience to go through that. Just wanting to be a band again after we broke up. We gave them the best record we gave them on the budget we had to make it.

"How It Feels" is a decent record and they've got a great back catalog of our stuff. But they weren't satisfied. They totally were of the mindset that if you aren't gonna do Sunny Day for Sub Pop, we're gonna break you. You're not gonna do the band. That was hard to deal with, having them actively trying to break up the band. They purposely buried "How It Feels." It was almost like cutting off their nose to spite their face.

So, when they first signed you, did they seem more artist-friendly?

When they signed us, it was like a marriage made in heaven. It was like "Wow! Sub Pop." I mean they had all these great bands -- Nirvana, Mudhoney, Soundgarden. So we were totally starstruck. I mean, we didn't even have a lawyer look at the contract. When you're a small band, starting out, you just don't know.