Don't go looking for deep, meaningful insights, heavy social analysis or political statements at a Sammy Hagar concert. Just remember to choose a designated driver. Hagar doesn't play a concert as much as he throws a party. With his heart on his sleeve and a lampshade on his head, he gives his all to make sure his audience has as much fun as he does.

At age 53, Hagar's been doing this for a very long time. With three successful rock careers to his credit: as a member of both Montrose and Van Halen, and as a solo act, he has nothing to prove. With his retirement well funded, a good time is the only motivation to put his show on the road. His joy is evident and his age isn't beginning to show.

On a stage designed as a recreation of his Cabo San Lucas, Mexico hot spot Cabo Wabo, populated by a crowd of lucky locals selected to watch the show from onstage, the flamboyant Hagar is accompanied by his traveling bar band, the Waboritas. The band, consisting of Victor Johnson on guitar, Jesse Harms on keyboards, David Lauser on drums, and the bass player known simply as Mona. 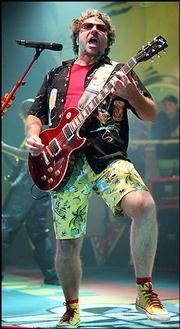 Hagar's touring in support of his new release "Ten 13," his second since his departure from Van Halen. The title, referring to his October 13 birthday is meant to signal a rebirth.

Hagar spent little time rallying the audience of mainly late-30-somethings to his cause. Sharing his drinks with the crowd, pausing to sign autographs, Hagar's relaxed enough now with his recent past to dip into his Van Halen catalog for crowd pleasers like "Top of the World," and "Why Can't This Be Love."

During what's meant to be the "acoustic" portion of the show, Hagar spontaneously jettisoned the set list to jam his way through Bo Diddley's "Who Do You Love?," and the Who's "Magic Bus" on his way to "Little White Lie" which featured a blues jam showcasing Johnson's slide guitar skills and quotes from the Count Five's "Psychotic Reaction."

Very few performers could make political-incorrectness so charming. Scantily clad "waitresses" delivered drinks to Hagar on stage, off-color commentary on comparative ethnic anatomy, and anthems to drinking too much and driving too fastï¿½how low can you go? Hagar manages to go subterranean with a touch of grace.

Hagar reminisced about playing in Kansas City, Kansas' Memorial Hall in 1977 and 1981. Memorial, a charming armpit of a place is just perfect for the sort of big-rock-in-a-small-place feeling a show like this thrives upon.