Vintage clothes can be modern

A fine wine touts its vintage, and the vintage work of an author or artist represents his absolute best. But when vintage and clothes are mentioned in the same breath, some people might think funky, but many just think old.

Levi's and wildly patterned shirts are still hot, say fashion forecasters, but look for 1920s-style bathing suits and sailor duds to make a comeback, too.

Dubin is the founder and former director of the fashion department at Sotheby's auction house. She teamed with art and design writer Ann E. Berman to produce "Vintage Style" (HarperCollins, $40), a how-to book on incorporating vintage clothes into a modern wardrobe.

"I consider vintage to be anything that's not in the stores right now," says Dubin.

What makes vintage items continue to stand out in your closet and stand up to time is the quality, she says.

Instead of paying hundreds of dollars for the runway styles inspired by past fashion eras, savvy shoppers can buy the real thing for much less, she says. Smart investments include garments with high-end department store labels, including those from the now-defunct I. Magnin and Bonwit Teller stores, because these brands likely are lined and stitched properly.

And because vintage is very hot right now, clothes that are representative of a distinct time ï¿½ like paper clothes from the 1960s or the extreme bellbottoms of the '70s ï¿½ can actually update a wardrobe. For 2001, Dubin predicts 1920s-style bathing suits will be very trendy, as will sailor duds.

Another attractive asset of vintage clothing is that it offers more options to consumers. Most people know what makes them look good, but flattering styles for their body type may only be "in" for a season or two and then disappear from stores, explains Dubin. By wearing vintage, people can continue to wear their best-suited styles while avoiding an outdated look.

"One of the problems with 'fashion' is that it doesn't target the end user." 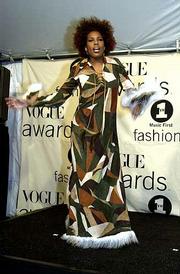 Even women who could afford the real thing, like singer Macy Gray, often opt for vintage duds. Gray wore like this very 1970s ultrasuede dress to the VH1 Fashion Awards earlier this year.

But a cardigan sweater, a white button-down shirt or black leather pants represent always-fashionable and user-friendly clothing. It doesn't matter if the shirt is a tailored version with a soft turn-down collar from the 1920s or an oversized, broadcloth Ivy League style from the '50s, according to Dubin. In 2000, both are equally stylish as long as the silhouette is flattering to the wearer.

In the book, a black halter top made in 1975 is shown three ways for three completely different outfits. It's paired with psychedelic-patterned knit bellbottoms to represent the '70s, a three quarter-length coat in a taupe-and-white check and a white knee-length skirt for the '60s, and a full-length cranberry satin ball skirt and black beaded shawl for the '20s.

Dubin says her own petite, curvy figure looks best in clothes that draw on the structured styles from the late 1950s, paired with some casual looks from the '60s. (She loves a good A-line dress.)

Someone who is tall and lean but not super-fit has an early 1940s figure, and she'll likely look good in a longer skirt or men's tailored-style clothes. Prada has recreated this look for 2001, Dubin notes.

The androgynous look of the '60s is ideal for a Twiggy-like, super-slender shape, and a statuesque, long-legged woman ï¿½ think Jerry Hall ï¿½ can carry off the long, peasant looks and sleek knits of the 1970s and early '80s.

"All of the fashion rules have been broken down. Pick and choose what works for you," advises Dubin.

For first-time vintage shoppers, Dubin recommends sticking to basic styles and traditional colors. Your own eyes are the best tool for picking quality and flattering garments, she says. Don't be afraid to feel the fabric and examine the seams, and don't pay too much.

"Because it (vintage) is trendy, it has gotten more expensive, which defeats the purpose of vintage."

But, she adds, there still are deals out there for people willing to sift through racks or search on the Internet.

"The Internet has allowed 24-hour shopping, and it's democratic shopping. You don't have to be in New York to get great clothes and great deals."

"Vintage Style" highlights eight categories that are almost always a good deal because there is room for these looks in almost any wardrobe: denim, leather, Pucci prints, animal prints, jersey, lingerie, beading and tartan.

For those who are wary of wearing previously owned clothes, get over it.

When you buy a vintage garment, Dubin suggests dry cleaning it. It will probably make it cleaner than a new item that dozens of people tried on in the store, she says.