Spears is no second fiddle

The consummate Lawrence fiddle player has sawed his bow at fairgrounds and festivals and clubs and taverns for more than four decades, and he isn't about to hang up the instrument. 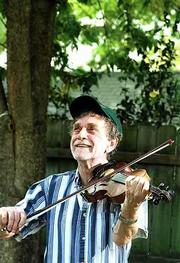 Billy Spears is second fiddle to none.

Spears is celebrating his 70th birthday ï¿½ and his career ï¿½ in a blowout jamboree that will include both present and past members of his seasoned bands. The concert starts at 8 p.m. Saturday at Liberty Hall, 644 Mass.

Unlike past musical efforts when Spears played, managed and worked to hold bands together, his daughter Carol Spears-Latham is doing the legwork for this show. That means Spears can concentrate on his music.

"Carol put it all together. All I have to do is show up and play my fiddle," Spears says.

The musician lives for his music, and he plays anything and everything. New country, old country, country and western swing and bluegrass are his forte. He covers other musicians' tunes and renders his own original material. He fiddles so much he can't even limit himself to one band.

But Spears also keeps busy with his bluegrass band, The Beer Bellies, who jam at outdoor festivals and concerts. And the fiddle player intends to cut and record his own CD during the next year.

"I just bought some good digital CD equipment, and I plan to do everything myself, and do as well as they do in Nashville. At least that's my opinion, anyway," he says laughing.

Spears toured in the Midwest and West regions of the country for decades. While playing for a Grand Ole Opry road show, he met up with his wife, Doris.

"She was a Northwest Canadian girl, and she came up and asked for my autograph. We've been together every since," Spears recalls.

Spears settled down to raise his family and scaled back his traveling. It might have stayed that way, but tragedy struck Spears and turned his world inside out.

In 1975 his daughter Sally was shot and killed by her boyfriend. The event made Billy determined to live his own life to the fullest, and he started pursuing his music full-time.

"He quit his job to play his music and go forward with his life," Spears-Latham says. "He was gone all the time for two- and three-month stretches, then he'd be home for a week and then be gone again."

His music was his solace and his salvation. And he worked the country scene hard, sharing the stage with artists such as The Nitty Gritty Dirt Band, New Grass Revival, Johnny Paycheck and Asleep at the Wheel. He landed a music deal and was recording his first album of original material when tragedy struck a second time.

While on the road in Oklahoma, Spears dived into an old swimming hole and struck his head on a submerged log, severing two vertebrae and leaving him paralyzed. 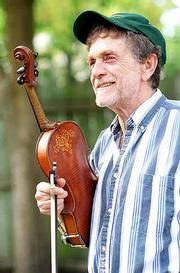 Billy Spears, Lawrence fiddle player, is celebrating his 70th birthday ï¿½ and his career ï¿½ in a jamboree that will include both present and past members of his seasoned bands. The concert starts at 8 p.m. Saturday at Liberty Hall, 644 Mass.

"It's a wonder he didn't die when they were trying to take him to the hospital over bumpy roads," Spears-Latham says.

But Spears not only didn't die, he refused to live with his broken neck, and started out on a long road of physical rehabilitation. He spent eight months in a hospital, and after leaving his bed, he continued his therapy with only one goal in mind.

"I wanted to play my fiddle again," he remembers.

In the fall of 1979, one and a half years after his accident, Spears was again performing before crowds.

And he's spent every day since the accident trying to regain his technical ability. He suffered nerve damage to his hands, particularly his right one, but it hasn't stopped him. He just holds his bow a bit differently than before.

"I can still remember Billy recovering from his accident with bolts in his head and a 5-pound weight attached to prevent movement," former drummer Buddy Pettit says. "It was quite an experience then, and I think he's not only recovered, but he's a better fiddle player now."

Spears gets his biggest kicks playing for fans, and it's his goal that the crowd has just as much fun as he does.

"I want them to feel as good about it as I am when I'm playing," he says.

It was that type of attitude that attracted Pettit to join the band during Spears' mid-1970s tour.

"He's a real musician ï¿½ and I loved playing with him," Pettit says.

Spears grew up in a world of music. His father, grandfather and uncle were all violinists. His daughters still perform regularly with him on-stage. Lisa actually did make it to Nashville and spent four years playing pedal steel guitar in Porter Wagoner's touring band.

At this Saturday's bash, both of Spears' bands will take the stage, and several former band members are planning to attend and join in a jam session. Former manager Dwight Haldeman, who also managed The Judds and Merle Haggard, is making the excursion from Nashville. And guitar guru Junior Brown, who learned his licks playing for Spears in the late '70s, has promised to attend ï¿½ although that has yet to be confirmed.

"With Junior, we'll count on him being there when we see him," Spears-Latham says of the eccentric musician.

Family members from Oklahoma are making the trip so they also can perform with the bands. Spears' 20-year-old granddaughter, Ashley, will make her debut, while it's rumored that Spears' 91-year-old mother may sing a number.

Even Spears' 5-year-old grandson has taken up the guitar and violin.

"He likes to jam when I play," Spears says. "I'll turn him into a fiddle player yet."