Quilter's guild events include show and HAll of Fame

By By Joy Ludwig

At age 80, Lorene L. Mosser is still learning new quilting techniques though she learned at a young age.

"I did a quilt when I was 16 when I had the mumps," she said. "My mother and grandmother put me up to it since I was home for a month." 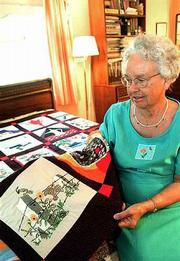 A Quilt block by Lorene Mosser is part of an award-winning quilt that will be featured in the Kaw Valley Quilt Guild Show Tuesday through Sept. 10 at Watkins Community Museum of History, 1047 Mass. Mosser's block won a judges award in an international quilting contest in 1989.

Over the years, Mosser's love for quilting has blossomed and taken her to various quilting workshops across the country. In 1989, she decided to enter an international quilting block contest for the Quilter's Newsletter Magazine's 20th anniversary.

"When I thought about the 'Home Sweet Home' contest, I remembered going out with (Girl) Scouts and seeing the limestone corner fence posts," she said. "That's part of our history. Because it was a prairie they used limestone posts instead of wooden fence posts."

From her fond memories, Mosser made a quilting block with meadowlarks, sunflowers and the limestone posts to depict her Kansas home. Her block was one of 25 blocks that won a contest award and was used to make a quilt for the magazine's collection. The quilt is a colorful representation of 15 states and 10 foreign countries including Korea, the Netherlands and Zimbabwe.

Eleven years later, the quilt has found its way to Mosser's home in Lawrence.

Russ, her husband, and she spent a few months tracking down the quilt for the Kaw Valley Quilter's Guild 23rd Annual Quilt Show, which takes place Saturday and Sept. 10 at the Lawrence Community Building, 115 W. 11th.

The quilt, which is on loan from the Leman Family Collection, will be one of nearly 30 quilts featured at the guild's Hall of Fame show, Tuesday to Sept. 10 at Watkins Community Museum of History.

"This is the first time I've ever seen it," Mosser said. "It's really a delight to have it in my house."

Mosser said she also will display an appliqued quilt called "Three Tall Ships," a redwork quilt (done in red embroidery) featuring vignettes of her granddaughter's life and a block of a quilt with Volkswagon Beetles she's making for her grandson.

"I make it a point to show something, whatever I'm working on, before I give it away," she said.

Award-winning quilts from other guild members will be on display at the Hall of Fame, including the "Iris and Goddess of the Rainbow" by Doris Morelock Hendrickson of Lansing. It took her more than 876 hours during two years to make the appliqued quilt, which she designed herself.

This year, the guild's members are hoping for their biggest and best annual show, which coincides with the 21st annual Fall Arts and Craft Festival in South Park. More than 100 quilts made by guild members will be shown at the community center.

"We're hoping for at least three times that amount this year," she said.

"This is the first time we've ever had vendors selling their wares," Bradley said.

Eleven vendors will sell items such as sewing machines, hand-dyed fabrics, custom-made quilt labels and patterns at the community building.

In addition, the guild will sell raffle tickets for an "Opportunity" quilt that members are working on whenever they get a chance. The open-style quilt features a colorful flower bouquet.

"It's taken us over a year to make. It's quite incredible," said Lori Kukuk, one of the show's organizers.

The drawing will be held at the guild's Nov. 21 meeting.

The show will conclude with a miniature quilt silent auction. Bids will be taken until 3 p.m. Sept. 10 at the museum. Proceeds will go to Watkins Museum, Hannah's House, CASA, The Shelter, Rape Victim Support Services and Habitat for Humanity. Last year, the guild raised $2,271.