Creator of Mission Control tells the inside story

Houston — Chris Kraft was in on the ground floor of the space program: He created Mission Control, directed the Mercury and Gemini flights and helped mastermind the Apollo moon shots.

So who better, Kraft asks, to tell what REALLY happened during the early, momentous days of space travel. 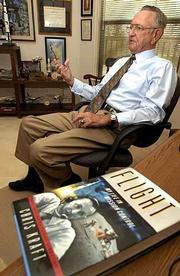 Former Johnson Space Center director and NASA flight director Chris Kraft talks about his book, "Flight: My Mission in Flight Control," during an interview at his home in Houston.

Certainly not the astronauts, he harrumphs.

"I liked my cockpit better than theirs because I knew what was going on," says the 77-year-old Kraft, author of the newly published "Flight: My Life in Mission Control."

"That's the reason these guys, these astronauts, write books," he explains in an interview at his Houston home, just days before his own book's release. "Apollo 13. They didn't know what was going on. People have told them what was going on.

"I was involved in everything that was going on at that time. Not the hundreds and hundreds of meetings that were going on out here," NASA's first flight director says, stretching out his arms. "But when that thing got back to here," he adds, drawing his hands together, "and you were going to decide what you were going to do, I was there."

Not only was he there, Kraft was God.

"There's only one flight director. From the moment the mission starts until the moment the crew is safe on board a recovery ship, I'm in charge," Kraft writes. "No one can overrule me. Not my immediate boss ... Not his boss ... Not even Jack Kennedy, the president of the United States ... They can fire me after it's over. But while the mission is under way, I'm Flight. And Flight is God."

With almost all of NASA's original insiders dead, Kraft's book ï¿½ four years in the making and released by Dutton in early March ï¿½ stands out all the more.


Among his blunt, no-quarter-given revelations:

l The NASA official in charge of manned space flight, Bob Gilruth, wanted only six original Mercury astronauts, but settled for seven in 1959 because two were tied for the last spot. "I never knew who the two tossups were," Kraft writes. "But I can guess about one of them, and he gave me enough trouble one day in space that I made sure he was grounded forever from going back into orbit."

l Astronaut Scott Carpenter was so befuddled that he couldn't throw the proper switches at the Mercury Control Center while practicing for Alan Shepard's 1961 launch. He was replaced at the "capcom" (capsule communicator) console by Deke Slayton.

When it came time for his own space shot in 1962, Carpenter screwed up so badly that his capsule ended up in the wrong position for re-entry from orbit. Just a little more tilt and Carpenter would not have come back in ï¿½ "or if he had come back in, he could have been grazing the atmosphere all the way" and burned up, Kraft says. As it was, Carpenter's Aurora 7 spacecraft splashed down 250 miles off target.

Kraft says of all the missions he managed, the closest he ever came to losing the crew was Carpenter's flight.

l Buzz Aldrin was supposed to be the first man out of the Apollo 11 lunar lander, according to all the early flight plans. But Kraft and other high-ranking space officials convened three or four months before the July 1969 mission and decided Neil Armstrong would descend the ladder first and become the first man to walk on the moon.

"We picked Neil as the commander because we wanted him to be the commander," Kraft recalls. "But Aldrin ... I talked about Aldrin's personality throughout the book. He was abrasive. He was egotistical. ... We would have been derelict had we not done that."

l NASA was on the verge of launching Apollo 11 to the moon without a television camera. Kraft argued successfully to put one on board.

"Look, we were paying Grumman $50,000 a pound to take pounds off that LEM," Kraft explains, referring to the lunar excursion module. "It also took time and it added to the complexity of landing on the moon. Now you can say it wasn't very complex. No, it wasn't. But how many of those are you going to add?

"I tried to write about that, too. Everybody and his brother wanted Neil Armstrong to do this, do that, would you do this for me, would you look at that. And the first thing you know, he's up to here. Somebody had to funnel that for him."

But to go so far as to land men on the moon with audio ï¿½ but no TV ï¿½ transmissions?

"It would have been absolutely ridiculous," Kraft says, "that we had to look at that on film."

A sequel in the wings?

"Flight" begins with Kraft's Virginia childhood in the 1920s and ends with Apollo 17 in 1972, the sixth and final manned moon landing.

Kraft included his rough, working-class family background (his father suffered from schizophrenia) as an inspiration to young people searching for meaningful careers.

He did not want to include anything beyond the moon missions because of bitter feelings he still holds about his last decade at NASA, when he served as director of the Johnson Space Center in Houston.

"'72 to '82 was a real pain," Kraft says. "It was budgets. It was management. I was dealing with people who were incompetent in NASA and, frankly, I found that a very distasteful period and I'd just as soon not have written about it."

Nevertheless, Kraft, who is donating royalties from his book to a Johnson Space Center scholarship fund, is thinking about writing a sequel that would cover the birth of the space shuttle program and the 1986 Challenger disaster.

He was hoping to get help from aerospace writer James Schefter, who collaborated with him on "Flight" but Schefter died in January.

"It is a hell of a story," Kraft promises.