New York — Baritone Dmitri Hvorostovsky has a different take on what it means to be a Don Juan: a philanderer deserving of respect.

"He's completely honest. If he sees a woman, he's proud to be 100 percent honest, and dedicate himself to her," says the Russian singing star. "He deserves respect for his honesty." 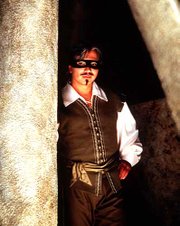 Baritone Dmitri Hvorostovsky takes on the role as the Don in the PBS "Great Performances" production "Don Giovanni Unmasked." The contemporary, 50-minute version of the Mozart masterpiece airs nationally tonight.

In the PBS "Great Performances" production of the Mozart masterpiece "Don Giovanni," the baritone assumes both the roles of the Don and his man Friday, Leporello ï¿½ a feat that would have been impossible in a stage performance.

"Don Giovanni Unmasked," a contemporary 50-minute version of Mozart's 1787 work, is raising some critics' eyebrows by playing with the plot.

The baritone "has seamlessly molded Don Giovanni into Leporello's fantasy, an alter ego," says director Barbara Willis Sweete, who collaborated with the Canadian Opera Company orchestra and chorus for the Rhombus Media production filmed in Toronto.

She pared down Mozart's score by using all the music heard or sung by Leporello, a pushed-to-the-wall servant dishing the dirt on his overbearing master.

Television viewers watching Hvorostovsky's artistic feats will judge whether Mozart is well-served by this cutting-edge treatment of his 18th century oeuvre.

The vocal soundtrack was prerecorded, with Hvorostovsky lip-synching during the filming. So, "it's pure acting," he said in a recent interview.

Another sleight of sound leaves an impression. For one scene, Hvorostovsky nibbled his way through parts of 23 pheasants before there was a final "Cut!"

Then, long after the singer left the set, a big burp was added ï¿½ electronically.

"I didn't burp. I did not, believe me," says Hvorostovsky, smiling mischievously. "They added the burp. Obviously, they thought it would be more natural. But I wasn't very happy about it."

When Hvorostovsky first hit the West about a decade ago ï¿½ "when I could hardly understand English" ï¿½ the 38-year-old native of Siberia was called everything from "the Elvis of opera" to "Siberian Express."

His long silver mane of hair and sex appeal soon appeared in a four-minute MTV music video released along with his album of Russian songs. But it was on concert and opera stages that he made his mark after winning the 1989 Cardiff Singer of the World competition.

Before he faced the cameras, he sang the original "Don Giovanni" in a new 1999 production in Salzburg, Austria, and he sang the role at the San Francisco Opera.

His career seems to come with twists. Hvorostovky's public musical persona started with a rock n' roll band, when he was a teen-age rebel under communism. "Ah! Freedom! So what could I do?" he remembers.

With "Don Giovanni," Hvorostovsky hopes his image shifts "from something funky to something more serious."