New York — New Jersey psychiatrist Jennifer Melfi was the focus of a breathtaking moment on a recent episode of "The Sopranos."

No, blood wasn't spilled or glasses raised, as is often the case in this HBO drama's most memorable scenes. Instead, mob boss Tony Soprano simply faced the truth. 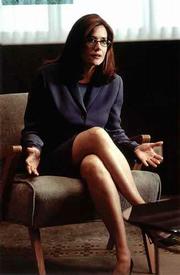 With the hit drama well into its third season, Lorraine Bracco reprises her role as psychoanalyst to mob boss Tony Soprano in HBO's "The Sopranos."

"What're you talking about?" he muttered to wife Carmela, who, during couples therapy with Tony, had just voiced doubts that Melfi was doing him any good. "She has helped me," Tony countered stiffly as Melfi looked on.

It's something Tony had never wanted to admit to himself, much less say out loud, even after all this time as Melfi's peevish, tough-guy patient. But in that moment of truth, Tony paid his shrink long-overdue homage. He also reaffirmed the power of Lorraine Bracco, the actress who plays Dr. Melfi so compellingly. ("The Sopranos" airs at 8 p.m. Sundays on HBO.)

"Melfi is the opposite of me," Bracco said. Maybe so. In a session with a reporter at HBO headquarters, she proves sassy, animated and unguarded. "With Melfi," said Bracco, "everything is conscious ï¿½ her movements, her looks. She's controlled. It's all about him."

By "him," Bracco is referring to Tony. That is, unless she means series star James Gandolfini. "I always have Jimmy go first," said Bracco, describing how the therapy scenes are shot: first, the camera set-up is on him; then, her. "He tells the story and I react to that."

Now consider how. How Melfi's soulful eyes observe Tony from behind those rimless specs. How her sensual mouth droops in solemn concentration. How deliberate and scrupulous she is: an image of composure, albeit with great legs.

Never mind. "It's not about her," declared Bracco.

Except that, in a larger sense, it is. Melfi underpins "The Sopranos." She provides perspective. She claimed the first line on the first show three seasons back, as she ushered Tony in for his first visit: "Mr. Soprano? Have a seat."

Besides the panic attacks and depression that drove him to her, Tony since then has been grappling with issues about ï¿½ what else? ï¿½ his mother. ("Quite a formidable maternal presence," Melfi sized up wicked Livia Soprano in the pilot episode.)

For the Prozac-packing Tony, Melfi remains his best chance for relief not only from his mood disorders but also from the tangled, corrupt life he leads. She serves as "the moral through-line of this project," Bracco said. Melfi is the light.

No matter how painfully a session with Melfi may unfold for him, it's the closest thing to a safe haven he (or, for that matter, the "Sopranos" viewer) has. Said Bracco, "When you find him in therapy, you sigh with relief: 'OK, good! He's supposed to be there."'

Not that life is safe or in control for Melfi, especially after taking on Tony as a patient. She has been forced into hiding to evade Tony's mobster enemies. Her boyfriend was beaten up by a cop at Tony's misconstrued request. She had a drinking problem. She was raped by a stalker in her parking garage. She sees her own shrink.

Mostly, Dr. Melfi (and, hence, Lorraine Bracco) is found quarantined in her office opposite Tony.

In many of those scenes, she doesn't even budge from her chair.

But in a series filled with sex, violence and delicious dirty dealing, she doesn't get much scenery to chew.

"I've done that," said the actress, most notably in the film "Goodfellas," for which she scored an Oscar nomination as the spitfire wife of a Mafia informant.