The linkage between rock 'n' roll and sex is inextricable. The term "rock 'n' roll" is by some accounts taken from a term for the act itself. And while human sexuality underlies almost all human endeavors, in no form of expression does it lay any closer to the surface, or as often above the surface, as with rock music.

Rock has always contained a huge helping of male fantasy. I've never known any guy that didn't first pick up an instrument or join a band at least in part because they believed it was an effective way to meet girls. The flip side of that coin is that there must be something about guys in bands that a good number of girls find attractive. 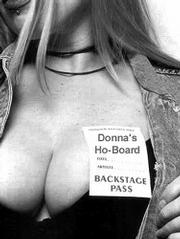 An image from Donna's Domain, a groupie Web site run by female fans.

As a kid, the posters on the walls of the girls I knew made a clear statement. They said, "These are the guys we want!" So we hung posters of scarier rock guys, as if to say, "Hey, you want those wimps, because you can't handle the guys we imagine we're gonna become!"

What we didn't think about was that the girls we knew had a much better shot at getting their rock idols than we did of becoming them.

I never really watched groupies in action until when in my 20s I worked as a local stagehand for touring rock shows. Then I was able to suss out that these were young women on a mission.

They came mostly in pairs, for protection or moral support. They were hunters, pursuing their quarry. Those endowed with the most impressive attributes, which worked deliberately and methodically, made the cut. Into the arena, attaining the backstage pass, making it onto the bus, they'd proceed, surviving the culling process at each stage.

If I ever wondered what drove them, how they operated or what their joys or sorrows were, I could have never gained access to such information. I was neither their prey nor anyone who could help them get any closer to it.

Of course today, as with anything else from bomb-making tips to meth lab construction techniques, the World Wide Web is a useful resource if you just turn over the right rock.

Not surprisingly, there are Web sites devoted specifically to groupie culture. The best known of these is Groupie Central (www.groupiecentral.com). Like others, it includes news and gossip and a sort of directory to groupies of great renown. If you want to find out who Cynthia Plaster Caster or Miss Pamela is, the skinny is there, as are backstage reports from stud-starred events such as the Grammys.

One feature of Groupie Central is the Blind Item Bonanza ï¿½ essentially bits of innuendo lifted from various gossip columns such as, "Which pop star is not quite the heart-throb teen magazines would have us believe. The poor chappy is desperately wrestling with his sexuality and is petrified his boy-loving past is going to catch up with him." Thereafter, the game becomes one of putting names to the thinly-veiled subjects on the message board.

A board is naturally the centerpiece to all of these sites, and it's there where each attempt at a groupie community lives and dies. Groupie Central's board is a litter box where even the most casual comment or innocent question leads to vicious catfights.

The participants sound bent on proving that every posted tale of rock conquest is fantasy, picking apart factual inaccuracies and misinformation. The women on the board appear to have a frightening knowledge of the first names of rockers' wives and girlfriends, and take license to alternately worship or verbally dismember the elevated few.

The moral relativism is breathtaking; there seems to be a broad but loose consensus that married rockers are off limits, but those with merely steady girlfriends are fair game. To pursue the first becomes the depth of venal sluttiness, the other merely competing for the low-hanging fruit.

Reading through one astonishing exchange regarding Tommy Lee's tendency toward spousal abuse such comments as "All the women and self-respecting groupies I know also think he's getting much uglier as he gets older," and "I for one wouldn't date, buy CDs by or even sleep with anybody who had done that in the past" were uttered with absolutely no irony.

A much different board, one with a real sense of community and mutual aid, albeit with a narrower, heavy metal focus, can be found at groupie Donna Anderson's "Donna's Domain," on the Metal Sludge Web site (www.metal-sludge.com/DonnasDomain.htm). But be warned, the reader postings often cater to graphic language.

There I found a much more active board lacking in the bitchiness of Groupie Central's, and learned among other things, the 10 things you'll never hear on a band's tour bus (No. 1: "I can't wait till we get to Omaha!"). Donna provides a wealth of essential information ranging from an A-Z listing of the physical attributes of well-known if not always well-endowed headbangers, to her pithy responses to her voluminous e-mail.

Another board is the All Access Pass board at pub55.ezboard.com/allaccesspass. It's newer and smaller but seems friendly enough. For a glimpse into how the women on the other side of a sometimes fine line deal with their mate's groupie temptations, there's a board for the wives and significant others of working musicians at pub54.ezboard.com/fmusicwidowsfrm1.

All four boards appear to have some participants in common. All would be equally well suited for that female friend in search of inspiration and guidance, and who craves the rock 'n' roll experience but can't sing or play.

Rather than dismiss the groupie lifestyle for all too obvious and facile reasons, reflect on the obsession with celebrity in our culture. Perhaps it's just the tiniest step toward taking a fascination for powerful, glamorous, wealthy and/or talented people to the next level. And just maybe, to foster an actual, rather than imagined connection to the object of your attention is in truth less weird than to do so only vicariously and within the bounds of imagination.