Sorkin, 39, was arrested Sunday at Burbank Airport when a search allegedly found "illicit mushrooms" in a carry-on suitcase, airport spokesman Victor Gill said. He said details on the type of mushrooms were unavailable; some mushrooms are hallucinogens. 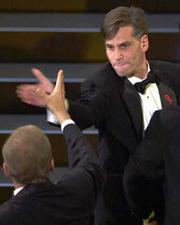 Aaron Sorkin, creator of the Emmy-winning drama "The West Wing"

Sorkin, who has admitted past problems with substance abuse, was taken to Burbank city jail for booking and released on $10,000 bond, Gill said.

"He was going through a screening checkpoint and personnel managing the checkpoint decided something was suspicious and needed further investigation," Gill said. Sorkin was en route to Las Vegas.

A playwright turned movie and TV writer, Sorkin wrote the Broadway and film versions of the military drama "A Few Good Men," the screenplay for "The American President" and the TV comedy "Sports Night."

"I am glad to be surrounded by such a supportive group of people and am prepared to proceed as directed by my attorney and in the best interest of my family," Sorkin said in a statement Monday.

"The West Wing," starring Martin Sheen as the president, won a record-setting nine Emmys last year. Sorkin has addressed the issue of drug abuse in the series, portraying the chief of staff character as a recovering addict.