Or a dollop of slime might help ï¿½ like the green goo that has drenched Will Smith, Rosie O'Donnell, James Earl Jones and others during the wild finale of each Nickelodeon Kids' Choice Awards. 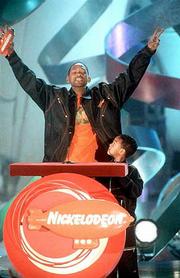 If the staid Academy Awards ceremony is the symphony orchestra of awards shows, the 14-year-old Kids' Choice is the kazoo band: noisy and with a madcap exuberance all its own.

Let the adults be proper. Children, who know better, just want to have fun as they celebrate their favorite movies, TV shows, music and stars as anointed in a nationwide poll.

Nickelodeon, the channel that caters to the pint-size crowd, gets top ratings for the show and reaffirms its touch with its valuable core audience.

Artists connect with consumers who have many buying years ahead of them. And children get an awards show to call their own ï¿½ with parents assured of a far tamer affair than, say, Viacom Inc. sister station MTV's racy event.

The Nickelodeon awards ceremony has unmistakable drawing power. Last year's edition had an audience of nearly 10 million, including more than 4 million viewers over 18.

Four-time host Rosie O'Donnell was nearly lost to illness (a hand infection) but she rebounded and will again serve as master of ceremonies for the event she calls a "blast." It's the only awards show for which she'll be host this year.

"Kids' Choice is a great way for me to combine my love for kids and comedy," said O'Donnell, a three-time host of Broadway's Tony Awards.

Top of the pop

Someone who's child-averse would be in big trouble: The in-house audience is encouraged to scream, and with gusto.

"We've handed our ear plugs the last three years," Nickelodeon executive Albie Hecht said. "It's this nonstop lovefest, screamfest, from the audience. It's like being at one of the original Beatles concerts."

A record 15 million votes were cast last year through the Internet, by phone and in stores. Although Viacom companies field their fair share of nominees, there's no monopoly ï¿½ of the four nominated movies, for instance, none is from Viacom-owned Paramount.

Youngsters' picks have remained consistent over the years, Hecht said. They liked the hottest pop stars in 1988 ï¿½ New Kids on the Block and Debbie Gibson were part of the first show ï¿½ and they like them now.

There also have been "resurrections" of veteran performers.

"Like Aerosmith in '98, who you wouldn't have expected on the show. But they used it to reach a whole new audience and their album sales went back through the roof," said Hecht, an executive producer of the show.

Nickelodeon is an impressive launch platform. With animated and live-action shows including "Rugrats" and "The Brothers Garcia," the channel reaches more than half of U.S. children between 2 and 14 years old.

Through media conglomerate Viacom, the ultimate reach is even greater. For instance, Nickelodeon's new animated TV comedy "Jimmy Neutron, Boy Genius" is morphing into a movie as well as an online and game property, Hecht said. Jimmy will appear as a presenter by computer imagery at the Kids' Choice Awards.

Although this heavy cross-pollination marketing to impressionable kids gives some pause, Hecht says he's encouraged by the kind of entertainment kids are choosing to watch and honor.

"You don't see 10 o'clock (adult) shows or things that are inappropriate for them popping up, so I think we're in good shape," he said.