Quiet dignity. It's a phrase that describes the man and his music. Legendary sitarist and one of the 20th century's true genius musicians, Ravi Shankar is an icon ? a myth as much as a musician. Though he began performing in 1930 (in his family's dance troupe) at the age of 10, he's often recognized for the more pop culture elements of his career. The gigs he played were equally mythical: The Monterey Pop Festival, Woodstock, The Concert For Bangladesh. Whether it was pristine concert halls or muddy fields, Shankar was there ? killing them softly, spinning heaven-sent notes of undeniable power.

India's unofficial cultural ambassador, he was awarded an MBE by the Queen of England and once spent a six-year term serving the Indian parliament. He has 11 honorary degrees, 17 albums and a mind filled with joy and memories. 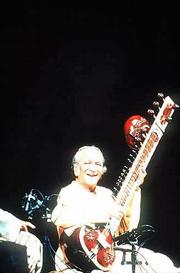 Shankar's latest release "Full Circle/Live at Carnegie Hall" captures the master sitarist ? alongside his 19-year-old daughter Anoushka and a few students ? at a venue he first played in 1938. "It has always been special because that hall is like magic, really," he says, phoning from his California home. "I consider it more as a temple of music because of the whole background and history behind it."

Q: Have you noticed a rise in the popularity of Indian music in recent years?

A: "Naturally, it is little more than before because all the facilities of CDs and records and television. I work very hard for last 47 years. Before, it was absolutely not appreciated at all. I feel very happy that I've worked hard and now great masters from Indian music and the younger generation, everyone is now coming and getting appreciation. There are a fantastic number of young students coming up in India just like anywhere else in the world."

Q: Does music come naturally to you after all this time?

A: "It is impossible to come naturally in the sense that any musician will tell you ? same way in the classical, Western musicians ? that you have to practice all the time to keep in shape, especially to play an instrument. You have to practice regularly to keep your hands at your command. Especially with our music, which is completely improvised and not a fixed, written-down music like in the West. So what happens is that, while performing, one gets new ideas and inspirations in the mind in a flash and you have to execute it."

Q: What continues to inspire you as a musician?

A: "The greatest inspiration is to have a live audience, an appreciative audience, to understand or follow what you are trying to say through your music ... I always think that any musician, especially in the genre that I play ? Indian classical music ? we are supposed to always improve. Especially from my guru, that's what I learned: to think of new experimentations within the hour-long boundary. That is the greatest thing, I think, about our music: We go on getting better and better. Of course, old age or infirmity or illness, those things can always hamper a musician. I've been very lucky. I just had my 81st birthday a few days ago and, up 'til now, I feel quite fit to handle the instrument. I don't know what tomorrow will be, but I have to thank God and my guru's blessing. For me, every moment has been so thrilling and miraculous that I cannot pin it down. But I think it might have been chance or it might have been ordained by some special power ? I don't know ? to come to West and make our music be appreciated and recognized at the level that it is today."

Q: How do you think George Harrison fit into that?

A: "George is something so special to me ? as my son, student and friend all combined. He's a fantastic person and I love him so much. It is a very mutual connection between us. Though I have never worked with him, in the sense that I jammed with him or performed in his songs or anything, I have taught him Indian music as much as he could learn and give time. It was only once that we toured together. I had a small group of about 14 Indian musicians ? this was in '74. And once I did this special show which he really helped me to arrange: the Bangladesh concert. And he has produced three, four records that I completely composed and did the music. So that has been the musical connection, but I have never worked with him."

A: "There has been no reason as such. He has been inspired. He loves Indian music more and more. And we have been together but we have never sort of ... like I have for instance composed (a) piece and taught and then we have recorded together. I have done the same with Jean Pierre Rampal, but I have not tried to play Bach or Beethoven because I don't know Western music. I feel that I can appreciate it but I haven't gone through the training. That's why I never tried to do anything like playing jazz or playing rock. I'm constantly asked by great musicians ? and they're all very friendly ? to do something together, but I've never done it."

Q: Did you think The Beatles helped bring the music of India to the West?

A: "'Norwegian Wood' was the first. George came to my concerts and he loved the sitar, and in London he found someone who was a student of a student of mine. And he learned how to hold the sitar and a few passages. Then he did that record. I had not met him then. I met him just after that in the summer of '66. It helped in the second stage. I was performing from 1954 in Europe and then came to America in '56 and gradually within a few years I was playing in Carnegie Hall, as a classical musician. I was very successful and very well-known, but I was not a pop star. And this association with George created a tremendous hullabaloo as you say. (laughs) And sitars all the sudden became very popular and I became a superstar, which was good in a way ? good in the sense that it made especially the young generation very conscious of our music. But it had the other side which I did not like. I was very hurt and pained (about) the association of the whole hippie movement ... drugs and associating it with India. And all the santa, mantra, kama-sutra, hashish, yoga, Grateful Dead, sitars and image."

Q: Were you actively trying to counter that image?

A: "I couldn't help it if they play the records in Haight-Ashbury in their places. But I was fighting against it. I got up and went away with my sitar if I saw misbehavior in the public in those days. Monterey was the first one, and I always said that because it was the first one ? in spite of the drugs still being there ? there was a certain amount of innocence. The kids, they did mean peace, love, flower power and all that. But then it got very mixed up, and by the time of Woodstock, I knew it was going to end. Monterey did have some feeling of innocence and sincerity against war. Woodstock was like a big picnic with the music as the sideshow. It was all raining and mud and everybody was stoned. And that's where our music doesn't fit. Like Bach or Beethoven's music won't fit in there. Even today, they put that in the films sometimes: Smoking dope, taking cocaine and you hear the twang of a sitar. They think that goes, but that is the wrong conception. But what can you do? That's the whole commercial part of it."