Archetype is one hip-hop group that will never be labeled gangsta rap. Rather than spewing noxious tales of cash, money and hos, the Lawrence-based duo mixes nimble beats and dexterous, native-tongue rhymes that steer clear of the bling-bling mentality that often pervades the genre.

"A lot of the newer stuff that's coming out is just (expletive)," Archetype emcee I.D. says, listing The Pharcyde, Roots, Mos Def, Nas, Killa Priest and OutKast as worthwhile groups. "There was a point when the mainstream of rap was cool, you could hear some good (expletive) on the radio. Back in the day, people put a lot more heart into their albums. Now, it's nothing but diamonds and Rolexes." 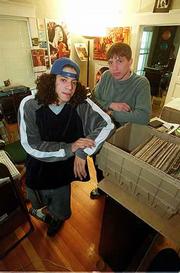 Members of Archetype, a rap act from Lawrence made up of members Jeremy Nesbitt, left, and Isaac Diehl recently showcased at KJHK's Farmer's Ball.

Archetype is comprised of two elements, I.D. (Issac Diehl, 21) and sonic wizard Nezbeat (Jeremy Nesbitt, 20), who insists that he's a producer not a DJ.

"DJ-ing has more to do with scratching and turntableizm," Nezbeat explains. "I don't deal with turntables, period. I deal with making the actual music, the beats. A lot of guys produce but they call themselves DJs because they do that too. I'd love to be able to add that element myself, but when it comes to music, I'm always thinking of beats."

"I just write what comes to me," I.D. says of his contributions to the group. "I don't pick a topic and write a song about it. I just wait for something to kind of flow into my mind. Then I write and rewrite that idea, try to crystallize an image. What I go for is to have rhythm and harmony that's easy to consume but still has content."

Though I.D. and Nezbeat ï¿½ both natives of Manhattan, Kan. ï¿½ have just begun to make a name for themselves in Lawrence, they started working on music in 1993 as junior high students. In recent months, the pair has been honing new material and working on its live show. Though Archetype has yet to release a CD, it had the opportunity to record a fiery 14-track demo at The Conservatory of Recording Arts in Tempe, Ariz. Created over an intense four-day period, the sessions gave Archetype an opportunity to learn its craft in a professional setting and get a taste of the dynamics of studio work.

"It was definitely a new experience for us," I.D. recalls. "To go from the basement or the bedroom to this million dollar studio where everything's separated ï¿½ all of the sudden, I'm in this glass booth rapping. It can take the fun out of the whole thing, but I'm glad we had the experience. That's why I like shows: You can do a whole song, whereas in the studio it's like, 'Do your verse here.' You're not playing a song, you're producing it."

Onstage is where Archetype's alchemy comes alive. The group's latest performance ï¿½ at KJHK 90.7 FM's Farmer's Ball contest ï¿½ found it playing to a small but appreciative audience that delighted at the duo's low-key approach to making music. Rather than stalking the stage, pouring champagne on the crowd, encouraging females to strip and other thug-life postures, Archetype kept the focus squarely on beats and rhymes, tossing in a lethal dose of old-school freestyles that rose and fell, started and stopped. That, according to Archetype, is the mark of true improvisation, as opposed to some area acts that repeat the same exact "freestyles" at show after show.

"People do that all the time," I.D. says dismissively. "You can usually tell if someone's freestyling: It's not perfect and that's part of the beauty of it, that rawness."

Trying to make waves in a college town with alt-rock leanings can be a tough ride for an up-and-coming rap act. Archetype ï¿½ which lists Approach, Sevenfold Symphony, Rebel and Mac Lethal among the area hip-hop artists the pair admires ï¿½ is fighting against the transient nature of the local music scene and the still-strong division among various musical cliques.

"It's growing," I.D. says. "It's just like any other hip-hop scene but it's on a much smaller scale ... There's a lot of people trying to do stuff, but they're not really in groups or anything. This guy makes beats, another guy's rapping and looking for a partner, someone else is a DJ who'll play your party."

The band also points out that most of the "local" rap acts playing Lawrence are actually from nearby cities, adding to the general lack of cohesion.

"Everyone that I see at shows is either from KC or somewhere else. In Lawrence, there's a small minority population ï¿½ there's not as many black people or Hispanic people. In big cities ï¿½ not to be stereotypical ï¿½ the hip-hop scene is glorified and appeals to the white, suburban kids because it's all around. You see people doing it on the streets, so it's always there. Here, it's not in your face; you don't see it."

"There's definitely a lack of hip-hop venues," I.D. adds. "It has the potential to be dope, but there's not enough of a scene to make it dope. It's a college town so people are always coming and going. There's a fickle mass mind and everyone's looking for whatever's going on right at that moment. Hip-hop is kind of something you have to be into for life."