'The tribe has spoken'

By The Providence Journal

The Middletown, R.I., police were justified in arresting "Survivor" star Richard H. Hatch Jr. on a child-abuse complaint last year even though Hatch was later cleared, a federal judge has ruled.

"It's easy to be a Monday-morning quarterback and second-guess the officer after the fact. But the Supreme Court says we need to put ourselves in the officer's shoes at the time," said Chief U.S. District Judge Ernest C. Torres. 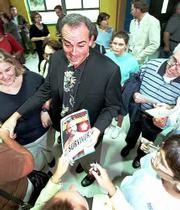 Richard Hatch, the original "Survivor" winner, says he believes he's not being treated fairly in his hometown of Middletown, R.I., though a judge mostly disagrees. Hatch sued the city's police department for releasing arrest information shortly after he returned to Middletown from "Survivor." Most of the lawsuit was dismissed this week. Hatch is shown in this September 2000 file photo surrounded by Middletown residents seeking his autograph.

The judge also dismissed Hatch's claim that the police violated his privacy by telling the media of his arrest, saying that the police had made a "reasonable" judgment about what to release to the media.

In granting the town's motion for summary judgment, Torres said there was not enough proof that any of the police officers named as defendants released a police mug shot and a witness statement to The National Enquirer.

However, Hatch's suit also named "John Does" as defendants, accusing unnamed individuals of leaking that information to The Enquirer. The judge refused to dismiss that part of the case. That issue could come to trial soon, Torres said.

Christopher J. Behan, Hatch's lawyer, said he was disappointed with the ruling but said there is still a case against the Police Department.

On April 27, 2000, two days after returning from the island where CBS's reality television show was filmed, Hatch, 40, of Middletown, was arrested and charged with second-degree child abuse of his son, then 9. Hatch, who had won the $1 million contest, is now a radio talk-show host in Boston.

That morning, one of the boy's teachers at the Aquidneck School noticed a scrape and bruise on his forehead. After being taken to the school nurse, the boy said that while on a 4:30 a.m. run, he could not keep up and Hatch pulled him by the ear. The boy said that when he fell to the ground, Hatch made him do pushups and then pushed his head into the pavement and put hands around the boy's neck.

The criminal charge was later dropped. Almost a month after Hatch's arrest, a Family Court judge ordered the boy returned to his father.

In March, Torres dismissed a separate lawsuit by Hatch against the Department of Children, Youth and Families. Hatch has filed an appeal with the 1st U.S. Circuit Court of Appeals. The appeal is pending.

In his lawsuit against Middletown, Hatch contended that he had been wrongfully arrested because the police acted only on his son's statement and never spoke to him. Hatch also claimed that personal information had been wrongfully released by the police to the media, damaging his reputation. Hatch also said that information, including the fact that his son was adopted, should not have been made public.

Torres ruled that the boy's story and the marks on his body were enough probable cause to make an arrest.

"You've got to respect a judge's decision," Behan said. "But it's difficult to accept that a 9-year-old boy can make allegations against his father ï¿½ who can be charged with a felony ï¿½ without the police making an attempt to talk to the father."

On a later date, Lt. Barry Smith spoke to The Enquirer, but has said that he only gave out information similar to that released by Leonard, with personal information blacked out, consistent with department policy. At some point The Enquirer obtained Hatch's mug shot and a copy of a statement by Hatch's son.

Torres ruled that none of the information released by Leonard violated Hatch's privacy. He noted that the law is complicated because arrest records are public documents while all information related to child abuse is confidential.

"Because of the ambiguity, it seems to me that police officers should not be held liable," Torres said.

He also ruled that there was not enough evidence to prove that Smith had released anything besides basic information to The Enquirer. Smith was quoted in an Enquirer article that was published on May 16, 2000.

Because it was not clear who released the mug shot and the boy's statement, which were included in that article, Torres left open the case against "John Does."