From behind a prison's walls

'Last Mouthpiece' offers an insider's view of the Philly mob

Philadelphia — A chill went through mob lawyer Bobby Simone as he walked up a narrow, deserted South Philadelphia alleyway. On each side of him were associates of reputed Philadelphia mob boss Nicodemo "Little Nicky" Scarfo.

"Was this it?" Simone thought. "Should I try to run away? Were these guys going to kill me? Would they shoot me in this deserted alley?" 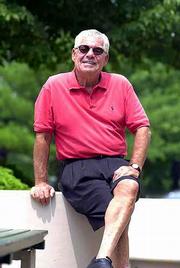 Author and former mob lawyer Robert F. Simone's account of the Philadelphia mob from the 1970s through the early '90s, "The Last Mouthpiece," was written from the federal prison camp where Simone spent nearly three years for racketeering and extortion conspiracy.

Simone didn't run. And he wasn't killed. The mobsters, it turned out, just wanted some free legal advice.

An insider's account of the Philadelphia mob from the 1970s through the early '90s, "Mouthpiece" was written from the federal prison camp where Simone spent nearly three years for racketeering and extortion conspiracy.

Simone was once considered one of the best criminal defense attorneys around. In a career spanning more than 35 years, he successfully defended some of Philadelphia's most notorious mobsters ï¿½ including Scarfo.

But his life unraveled nearly a decade ago when he was convicted of conspiring with Scarfo and a former city councilman to extort $1 million from Philadelphia developer Willard Rouse III.

Simone writes in his book that he knew about the extortion plan but tried to stop it. He also claims federal prosecutors targeted him because he won several high-profile mob cases at their expense.

"All I did was try to stop a crime by telling people they were crazy and warning them they were being set up," he writes.

Disbarred after his 1992 conviction, the 68-year-old Simone regained the right to practice in federal court earlier this month (although he's still fighting to get back the right to represent clients in state courts).

The book's recent release came at an opportune time. Interest in the mob was heightened by the federal racketeering trial of reputed boss Joseph "Skinny Joey" Merlino and six co-defendants. They were cleared of the most serious charges ï¿½ including murder and attempted murder ï¿½ on July 20, although all seven defendants were convicted of a series of offenses including extortion, illegal gambling and unlawful collection of debts. It was the first big mob trial in Philadelphia since the 1995 conviction of crime boss John Stanfa.

Simone said he didn't follow the trial closely, but that even before the verdict he believed the government's case wasn't as strong as it was against some of his clients.

Simone was most active as a mob lawyer during the 1980s, before Merlino allegedly became a "made" man. Merlino rates only a few mentions in the book, although Simone did call him "one tough kid" who "did not take (expletive) from anyone."

Simone relates one story in which he was warned by an FBI agent that his life was in danger. "Nick Scarfo and some of his people feel that you know too much," the agent said. Barely a month later, Simone found himself in that alleyway with Scarfo's henchmen.

"It gave me cause to think, to hesitate, but I was so busy and so stupid I just went on to my next case," Simone said in the interview. "Do I believe I was a target (of mobsters)? Not necessarily, but there are a lot of crazy people out there."

Scarfo, who's serving a life sentence, occasionally writes to Simone. "He knows the book is out. I haven't heard any complaints from him yet, thank God," Simone said.

Disappointed in the FBI

"Mouthpiece" has all the elements of a classic mob tale: the back-stabbing, the body count, the colorful nicknames.

More broadly, the book is an indictment of a criminal justice system in which mob informants are often set free and paid handsomely for testifying against government targets. "Rats, informers, snitches and stool pigeons," he writes of infamous turncoats like "Crazy Phil" Leonetti and Sammy "The Bull" Gravano.

"Government prosecutors free more criminals than all the best defense lawyers in the country," Simone writes.

Simone, who's divorced and lives in a Philadelphia apartment, still rails against an FBI he sees as corrupt as the mobsters he once represented.

"They said, 'Put Scarfo in jail and the violence will stop.' Well, it didn't stop," Simone said.