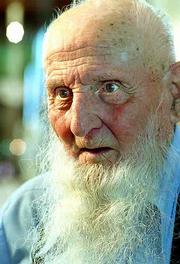 As a youngster, Henry Flory used to hear tales about Quantrill's raid from his grandmother, Suzanah Flory, and about the time she and her family watched in fear as noisy men on horseback set fire to their house and barn 8 miles south of Lawrence. Suzanah was 9 at the time.

Now 92 years old, Flory, a lifelong Douglas County resident and retired farmer, recalled some of those stories that sprouted 138 years ago.

"I used to have a good eighth-grade education, but it's sort of slipping away," he said, laughing. "My memory is far from perfect, but I can pretty well recall her stories.

"My grandmother's father was Jacob Ulrich. He owned a farm 8 miles south of Lawrence near Pleasant Grove."

History has it that Quantrill's men hit Lawrence about 6 a.m. Aug. 21, 1863, and didn't leave until mid-morning. They rode south through Douglas County with a list of anti-slave sympathizers.

Jacob Ulrich, a German Baptist minister, was on Quantrill's hit list. His anti-slavery beliefs were well known, and it was reported that abolitionist John Brown had been a houseguest of the Ulrichs during his travels to Osawatomie.


Today is the final installment of a Journal-World and 6News series on Lawrence history.World Online contributions to the series include a profile of Lawrence artist Ernst Elmer, who has painted a scene of Quantrill's raid, and a local guide to historical information about William Clarke Quantrill.

"By the time they got close to Pleasant Grove, a lot of Quantrill's men were drunk, and I guess you could hear them coming from a mile away," Flory said.

Neighbors of Ulrich and Rothrock rode ahead of the raiders to warn the intended victims.

"I remember my grandma saying that her mother, Mary, grabbed a pan of bread that was rising and they all ran into the woods and hid behind a rock wall about 80 yards west of the house," Flory said. 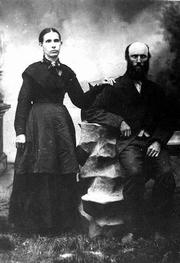 Flory said Quantrill's men left while the barn and house were in flames. The family managed to put out the house fire with water from a nearby creek, but the barn and its winter stash of hay and grain were already burning out of control.

"My grandmother said they had a brand-new, horse-drawn threshing machine in the barn when it burned," Flory said.

The raiders next stop was the Abraham Rothrock farm. The church elder had hidden in a cornfield but ran to the house when he saw the raiders mistreating his wife and daughter.

During the ruckus, Rothrock was shot and fell backwards into a cellar. Quantrill's men rode on, leaving one drunken comrade passed out in front of the wounded man's burning home.

"They say Rothrock's sons told their father they were going to shoot the Quantrill man who was laying drunk and passed out in their barn yard. Their father told them not to do it and said they'd have it on their conscience the rest of their lives," Flory recounted.

Jacob Ulrich, who had been in ill health before the raid, died three months later on Dec. 22, 1863.

Henry Flory looks at the tombstone of Jacob Ulrich in the Ulrich Cemetery nine miles south of Lawrence. Ulrich's home was burned by Quantrill's raiders in 1863 and he died the following December at the age of 60.

He's buried alongside his wife about a half-mile south of his homestead in the Ulrich Cemetery. It's not far from the ruts of the old Santa Fe Trail.

Henry Flory slowly made his way through the small, gated field of scattered headstones. It's flanked on one side by a heavy growth of trees, and a cornfield borders the other.

He went from stone to stone, looking for familiar names.

"I used to know where everybody was out here," he said.

One tombstone bore the name of Laura Fox.

"She used to be the switchboard operator at Lone Star ... nice woman."

Jacob Ulrich's headstone was partially blackened by something that looked like mold, making the epitaph difficult to read.

"I'm going to see if I can't bring my daughters over here to help scrub off that mold," Flory said as he headed for the car.

"I think it would help show the respect we have for these folks." 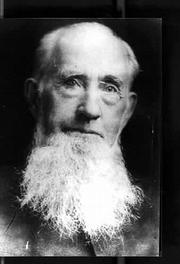 
Douglas County has long been home for members of the German Baptist community. It's believed their first organized group met in 1858 in Stephen Studebaker's log house southwest of Pleasant Grove.A meeting house, the first in Kansas, was built in Pleasant Grove in 1877. In the late 1800s, there was a split in the congregation, and the original German Baptists became the Old German Baptist Brethren. Their current meeting house, built in 1883, is in Willow Springs township 12 miles southwest of Lawrence.