Santa Fe, N.M. — Actress Kim Stanley, whose roles ranged from a nightclub singer in the Broadway play "Bus Stop" to the mother of Frances Farmer in the movie "Frances," has died. She was 76. 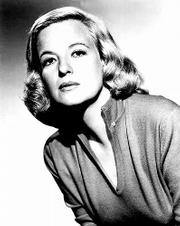 In "Bus Stop," she played Cherie, a worn-at-the-edges nightclub singer who meets a dimwitted cowboy who falls in love with her. Despite the praise, however, Hollywood passed over Stanley in favor of Marilyn Monroe for the movie version.

Although Stanley established herself as one of Broadway's most brilliant actresses in a little more than a decade, she never won a Tony.

For her television work, she won two Emmy awards ï¿½ one for a 1963 appearance in a "Ben Casey" episode and another for her role as Big Mama in a PBS production of "Cat on a Hot Tin Roof."