St. Andrews, Scotland — He's a dashingly handsome prince ï¿½ rich, famous, sophisticated and second in line to the British throne. All in all, Prince William is quite a catch for the ancient University of St. Andrews.

But down at the Harbor Cafe, a ramshackle hut overlooking St. Andrew's historic pier, owner Pat Dodds is unfazed. 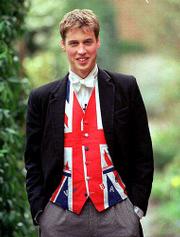 Britain's Prince William is seen in this 2000 file photo in Eton, England. The 19-year-old prince, who graduated from the prestigious Eton boarding school last year, will start a four-year degree in art history in September at the University of St. Andrews.

"If he comes in here, he will get treated like everybody else," said Dodds, 53, in a lilting Scottish accent, "and if he misbehaves he will get a scud in the ear."

The 19-year-old prince, who graduated from the prestigious Eton boarding school last year, starts a four-year course in art history when the term begins Sept. 24.

While Dodds, busy mopping down tables and serving mugs of tea, seemed unexcited about the impending arrival of royalty in the medieval Scottish town of St. Andrews, students and officials are.

The tabloids are already abuzz, with the Daily Express even reporting that Scottish separatists were plotting to kill the prince by mailing him anthrax spores when he arrived.

"We will not put up with it," said Lang. "We will not roll over and accept the worst excesses of the media."

During William's schooldays at Eton, and his adventurous "gap" year afterward traveling in South America and Africa, the British news media were kept on a short leash. Editors grudgingly agreed not to invade William's privacy; and in return, the royal family made photographs and information about the teen-age prince available at certain milestones in his life.

But now that William is all grown up ï¿½ and shows his mother Princess Diana's good looks and charm ï¿½ media observers fear that university will become a feeding ground for the paparazzi.

Both The Sun and The Mirror, two of Britain's best-selling tabloids, refused to comment on rumors they have each bought a property in St. Andrews.

Lang insists the university will do all it can to protect the privacy of its students ï¿½ including disciplinary action against anyone caught spreading gossip.

"The staff and students have always been expected to respect each others' presence," said Lang. "Handing out inappropriate information about anyone is frowned upon."

The town itself ï¿½ which has 16,000 people, including 6,000 students ï¿½ offers an Old World backdrop for the prince's education, with cobblestone streets, medieval chapels and sweeping coastline. Celebrities like Sean Connery and former President Clinton frequent the world-famous golf course.

Every Sunday, students dressed in their distinctive scarlet academic gowns stroll along the town's pier ï¿½ built from the ruins of a castle ï¿½ in a ritual thought to commemorate a student who rescued seven shipwrecked men from the bay in 1800.

In another tradition, first-year students at the university are invited to join an "academic family" of third- or fourth-year mentors.

"It is a very close-knit community," said Dana Green, president of the Students' Assn.

St. James's Palace, the London base for William's father, Prince Charles, remains guarded about plans for this next phase of the prince's life. A spokeswoman said no arrangements had yet been made for William to pose for pictures.

"We are looking at options," a palace official said on condition of anonymity. "I think that the media coverage during the prince's gap year has demonstrated the press's attitude can be very good and very supportive. The hope is that this will continue."