Nashville, Tenn. — Sara Evans, who became a country sensation this year with the success of her third album, "Born to Fly," was showered with seven nominations for the Country Music Assn. awards on Tuesday.

Evans, 30, led all nominees. They were announced at Adelphia Coliseum by the duo Brooks & Dunn and Jo Dee Messina. The "O Brother, Where Art Thou?" soundtrack, which has been one of the year's biggest commercial surprises and successes, was nominated for two of the most important awards ï¿½ album and song of the year. 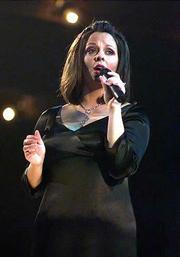 Evans is up for best female vocalist and for best single, song, video and album for "Born to Fly." She got dual nominations as a producer of her single and album.

The nomination for best female vocalist lifts Evans to the level of more established stars such as Faith Hill, Martina McBride, Lee Ann Womack and Trisha Yearwood, who were also nominated for the award. Tim McGraw and Brooks & Dunn and trailed Evans with four nominations apiece.

Nominees for the top award of best entertainer were Brooks & Dunn, McGraw, the Dixie Chicks, Alan Jackson and George Strait.

The winners will be announced Nov. 7 at the Grand Ole Opry House during a show broadcast live on CBS. Vince Gill, who wasn't nominated, will host for the 10th straight year.

Some of the biggest stars in country music ï¿½ Garth Brooks, Shania Twain and the Dixie Chicks ï¿½ spent much of the year on hiatus. While they were gone, the film "O Brother, Where Art Thou?" became a hit and its soundtrack sold more than 2 million.

"O Brother" is nominated for best album and the cut "I am a Man of Constant Sorrow" from it is up for best single. Both were produced by T. Bone Burnett, as were two nominees for best vocal event "Didn't Leave Nobody But the Baby" and "I'll Fly Away."

Brooks & Dunn were also nominated for best vocal duo, single ("Ain't Nothing 'Bout You") and album ("Steers & Stripes"). Kix Brooks and Ronnie Dunn each scored two separate nominations, for helping to produce the album and single. McGraw was nominated for male vocalist and received artist and producer nominations for his album "Set This Circus Down."

The 2001 inductees into the Country Music Hall of Fame, who already had been announced, are acknowledged during the awards show. They are the Everly Brothers, Sam Phillips, Waylon Jennings, Bill Anderson, the Delmore Brothers, Don Gibson, Homer & Jethro, the Jordanaires, Don Law, The Louvin Brothers, Ken Nelson and Webb Pierce.

About 6,000 CMA members, who work in the country music industry, nominate and select the winners.